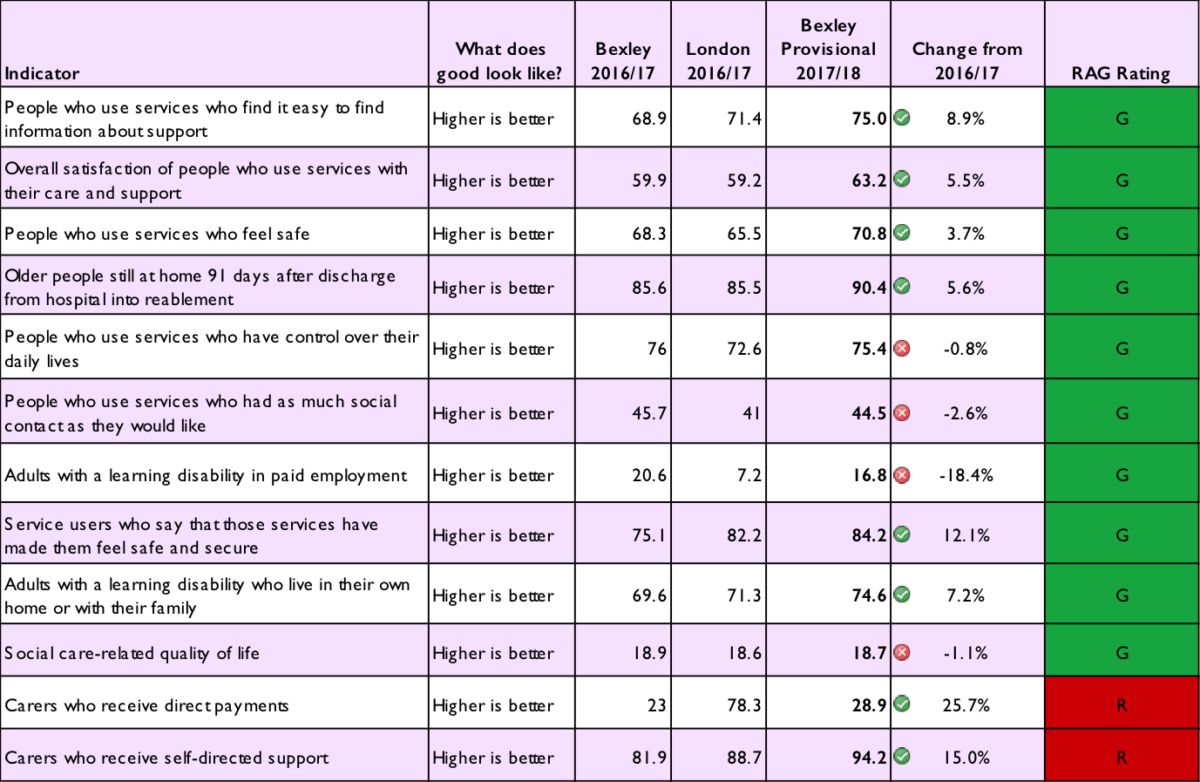 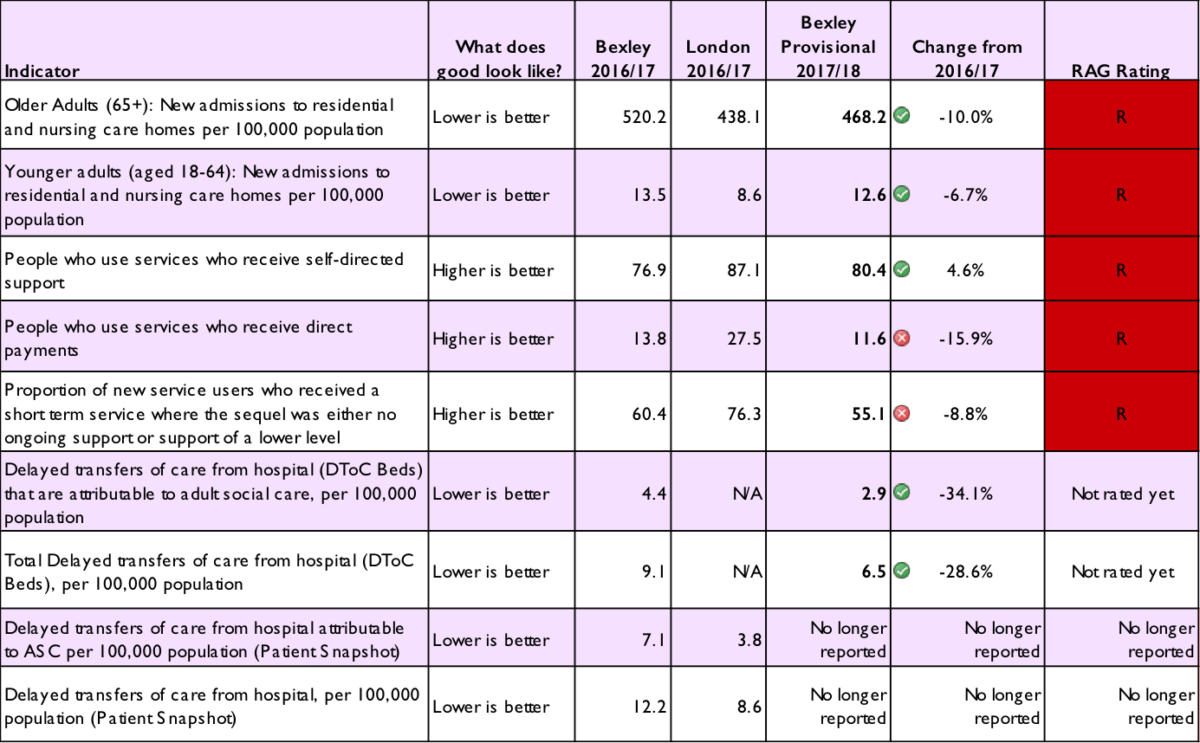 The majority of needs relate to frailty, physical disability and personal care support. Physical support for older adults is the most common type of care, making up 50.4% of all care provided during the year and reflecting the frailty of older service users. This is followed by support with memory and cognition (6.9%) and mental health support (1.8%). Mental health support was the most common type of care given to adults under 65, making up 22% of all care, followed by physical support (8.3%) and learning disability support (8.1%) 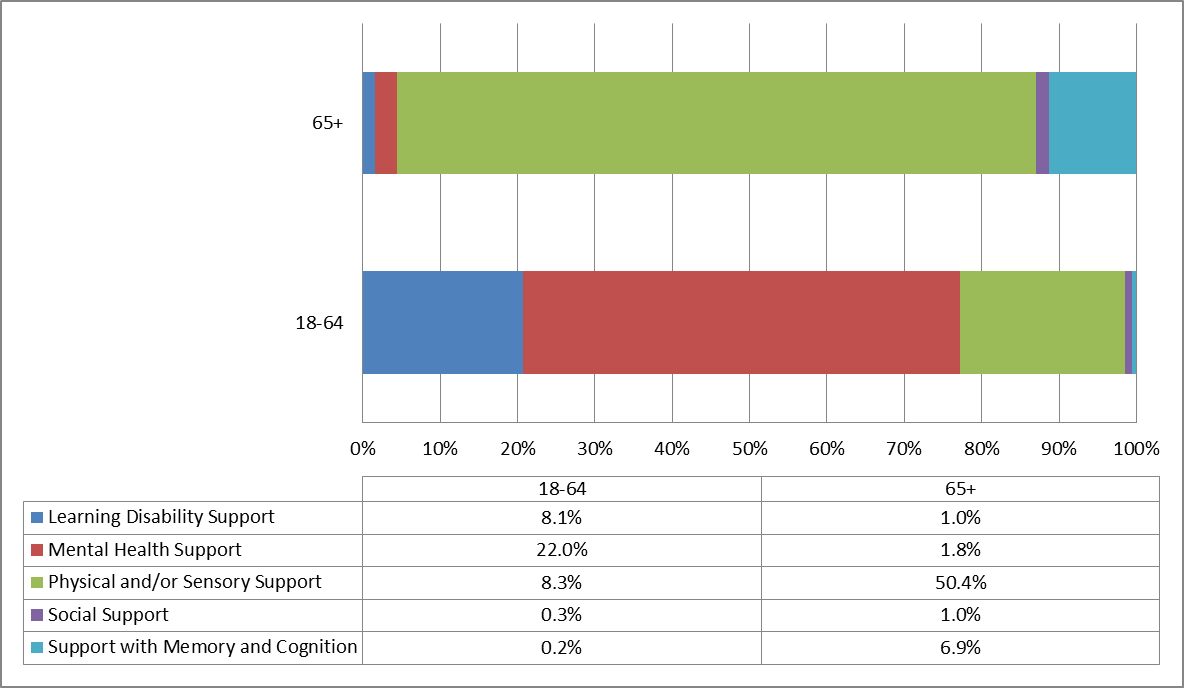 The majority of service users are currently white, reflecting the lower ethnic diversity among the older population. In 2016/17, 80.6% of adult social care service users were White, 10.9% were from Black and Minority Ethnic (BME) groups, and 8.6% were not recorded. This compares to an estimated 79.9% White and 20.1% BME population aged 18+ in Bexley.

Nationally, there is some anecdotal evidence that some people in BME communities may not make use of health and social care services. This may be because there is a greater emphasis within certain cultures on support being provided within the family or their community. There may also be other factors, such as cultural or language barriers or a lack of awareness of services and how such services can support independence.

In Bexley, our aim is to support more people to live in their own homes for longer, delaying the point at which they enter residential care and in some cases preventing this all together. Therefore, a lower rate of new admissions to residential and nursing care is better.

New admissions to residential and nursing care for older people (65+) 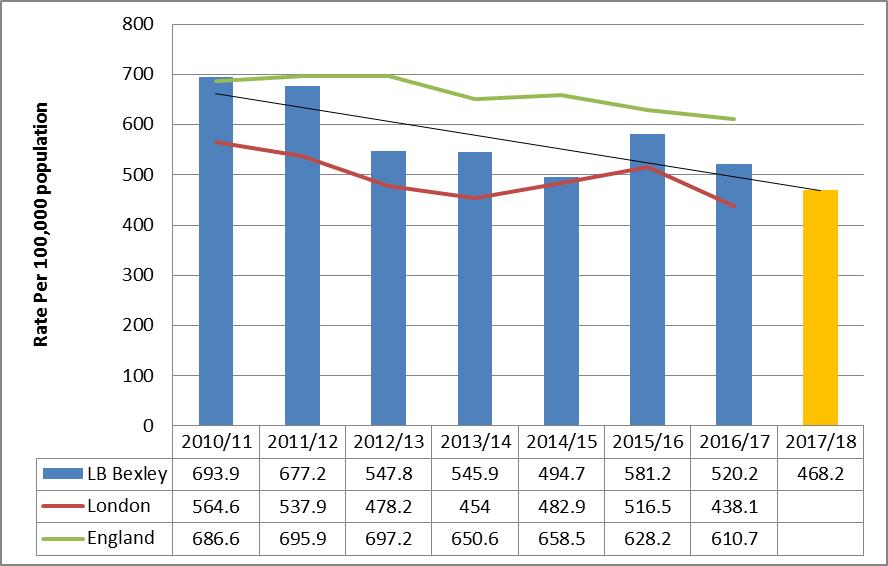 New admissions to residential and nursing care for younger adults 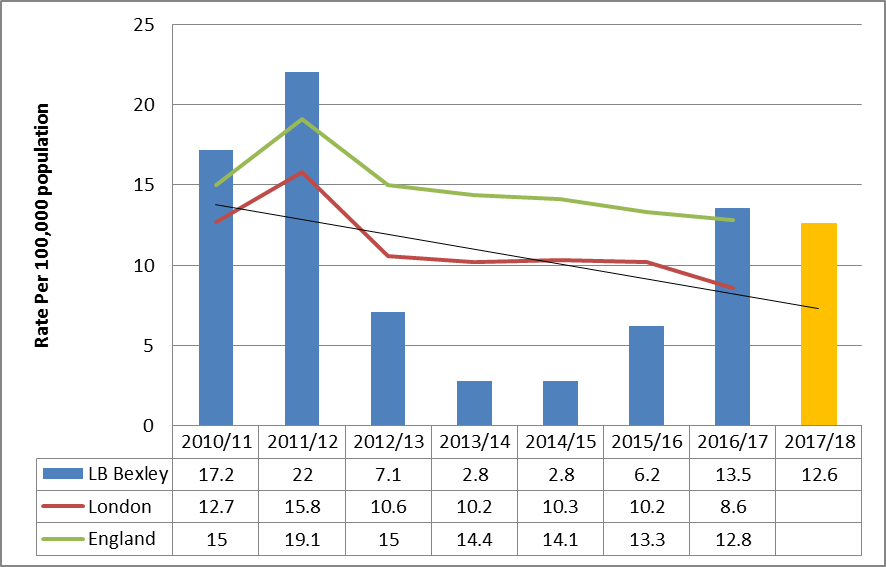 The overall number of people aged 18-64 in receipt of residential or nursing care, commissioned by the Council, has fallen from 240 younger adults in 2012/13 to 194 in 2016/17 – an average of 194 younger adults in residential or nursing care each year. A key priority is to develop the market to ensure that there are alternatives to residential care, including sufficient supported living accommodation, so that younger people with care and support needs are not faced with spending their whole adult life in a care home.

There is some evidence that service users are being supported in the community for longer and being placed later, reducing their length of stay in care homes. Average lengths of stay in residential and nursing care for all adults have fallen from an average of 70 weeks in 2016/17 to 62 weeks in 2017/18 (as at October 2017).

Further work is needed to understand the factors affecting the size of the self-funding population, such as general population ageing, the level of asset ownership among older people, and access to information and advice about the options available. We are looking at ways to help our residents to avoid making decisions about long term care from a hospital bed. Crisis intervention and preventative care may be a more appropriate option for some of our residents, thereby avoiding unnecessary admissions to care homes in certain circumstances.

The current care home market in Bexley is supported by block contracts[1] with three large providers and one smaller provider. The rest of the provision is managed under spot

[1] A block contract guarantees a given volume of business (e.g., a certain number of care home beds) to a service provider, usually over a set period of time, and in advance of the service being delivered.

contracting arrangements[1]. However, local authorities in London only commission about 42% of older adults’ residential and nursing care home beds. The remaining placements are mainly filled by people who choose to go into a care home on a private basis and self-fund their own care. Based on local ASC data, there were estimated to be 534 self funders in older adult care homes in Bexley in 2015, equivalent to a 50% market share of older adult bed capacity in the Borough.

Home Care is an important service that supports over 2000 people a year to live, as independently as possible in their own home. Currently, home care in Bexley is provided by 50 agencies, which provide a range of support to people at home, depending on their needs. This includes traditional home care services, reablement to support people to recover from a crisis and regain skills, and support on discharge from hospital. A small number of people have 24 hour live in care to assist them to manage at home and avoid long term admission to residential care.

CQC inspection findings for Bexley[2] show that further work is needed to raise standards and improve the quality of care home and domiciliary care provision in the Borough.

[1] Spot purchasing (or spot contracting) happens when a service is purchased by or on behalf of (for example, by a local authority) an individual. Services are purchased as and when they are needed, and are purchased on an individual basis for a single user. 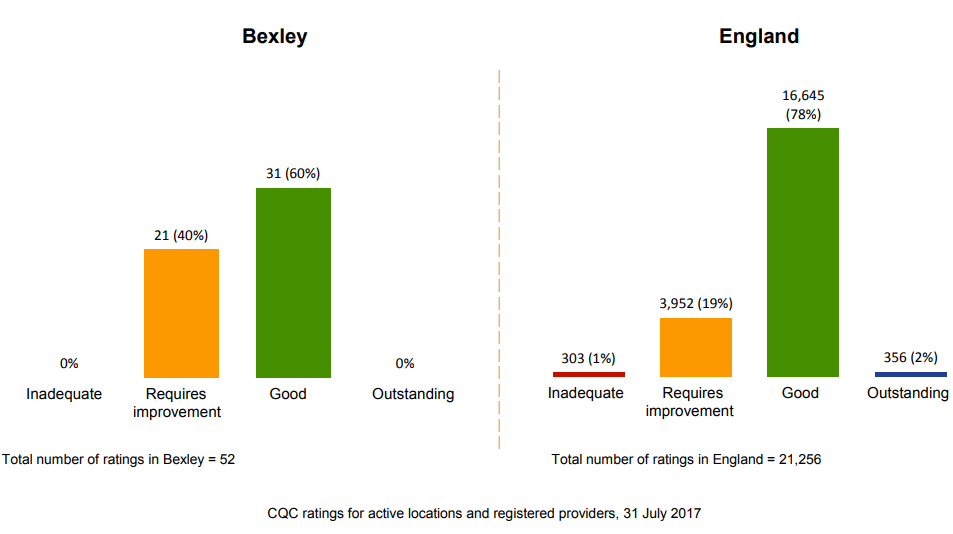 Delayed transfers of care from hospital

A ‘delayed transfer of care’ occurs when a patient is ready to leave a hospital but is still occupying a bed due to non-clinical reasons. NHS England is responsible for monitoring delayed transfers of care nationally.

The proportion of delayed transfers due to social care has increased since 2014 but a significant proportion of delays (53.2% in 2017/18) are still attributed to the NHS. Delayed transfers can be the result of delayed processes within the NHS, social care, or across both sectors and can occur for a number of reasons, including waiting for assessment and onwards care, patient choice, waiting for equipment to be installed, and housing issues.

Delayed transfers of care from hospital, attributable to both the NHS and social care, increased year-on-year in the period 2012/13 to 2015/16 but fell by 9% in 2016/17, reflecting system-wide efforts to reduce DToC, see Figures 98-99 for details. 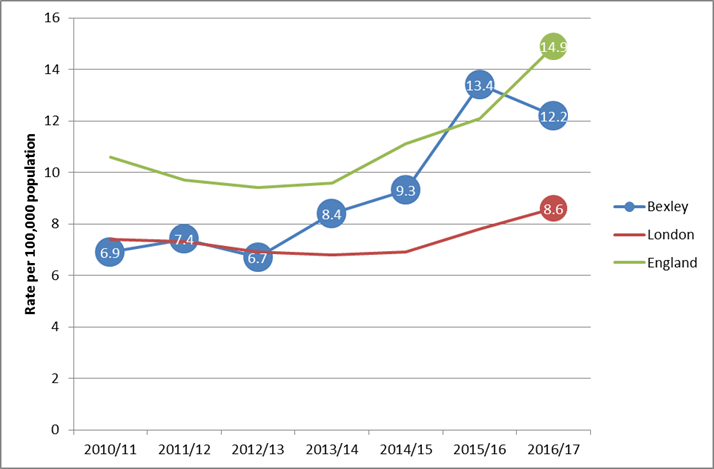 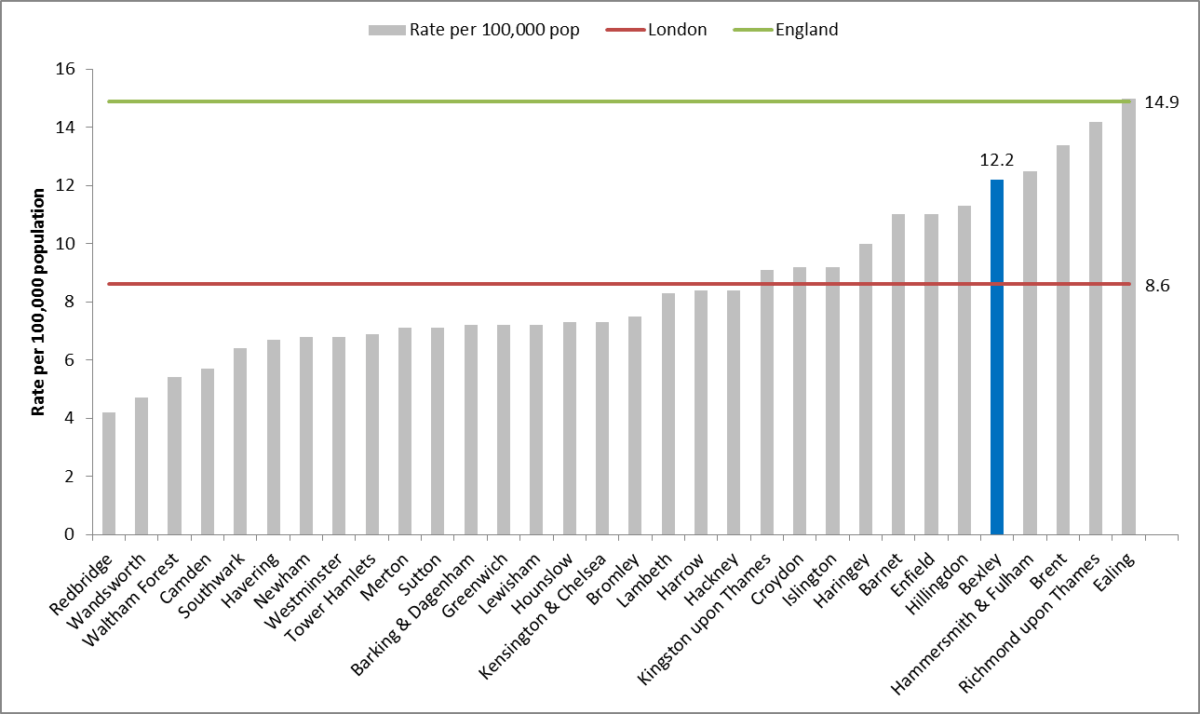 [1] Measured as the average number of delayed transfers of care (for those aged 18 and over) that are attributable to adult social care, per 100,000 population. 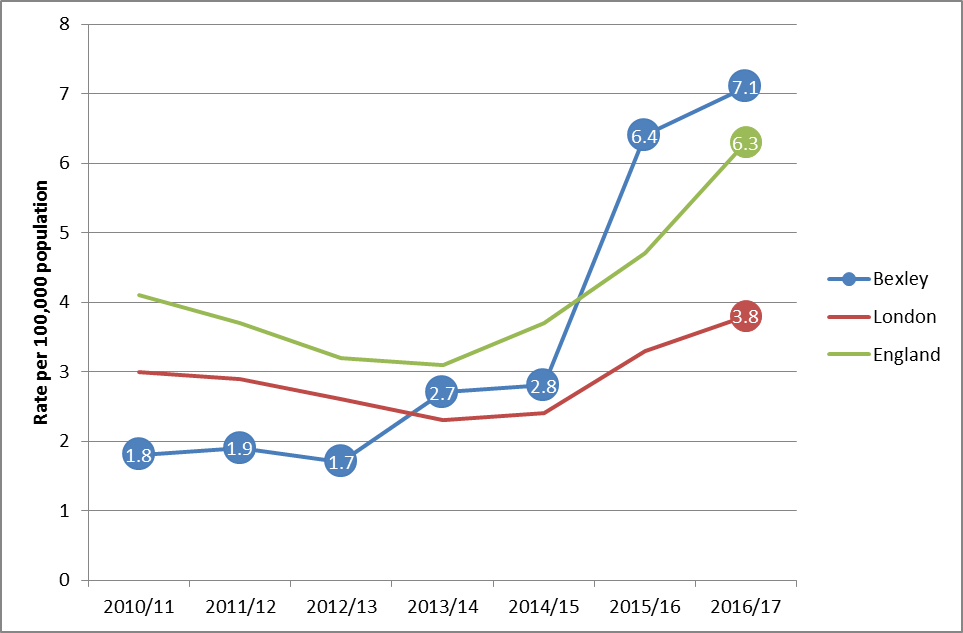 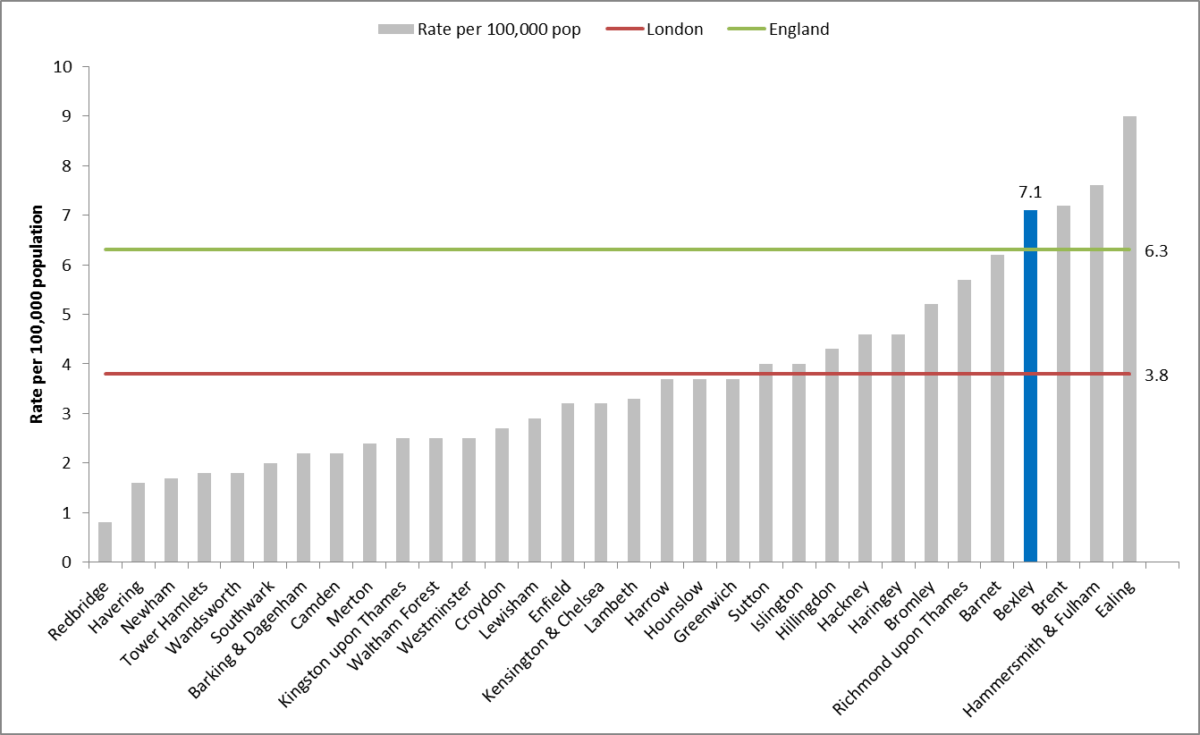 One of the reasons for the spike after 2014/15 relates to data quality and the robustness of procedures at the time for securing sign-off of delayed transfers of care. Ensuring that the hospitals’ DToC submissions are signed off by a social worker has not been prioritised in previous years and it has been challenging to get to the position where a ‘ready for discharge’ list is recognised as accurate by all parties. Significant work has been undertaken by all partners to address this, which has led to improvements over the course of 2017/18.

It has also been widely recognised that the system has been under significant pressure over the last few years, facing unprecedented demand throughout the year. Reducing delayed transfers of care is a key national priority and all local areas have been set the challenge of delivering ambitious targets to deliver this. A&E Delivery Boards have implemented significant work to streamline processes and pathways. A Patient Flow Manager is employed by Bexley CGG to address ‘blockages’ across the whole Bexley system and ensure a ‘pull through’ approach. Through our Better Care Fund Plan, we are also supporting the delivery of the High Impact Change Model for managing transfers of care.

Delays also occur in non-acute, mental health settings. In 2017/18, non-acute delays accounted for 45% of all delays. This is being addressed through a range of actions including weekly bed management meetings between ward staff and the commissioner to provide a level of scrutiny about patient flow through mental health wards. Collectively, these actions across the whole system have resulted in a 29% reduction in delayed transfers of care during 2017/18. 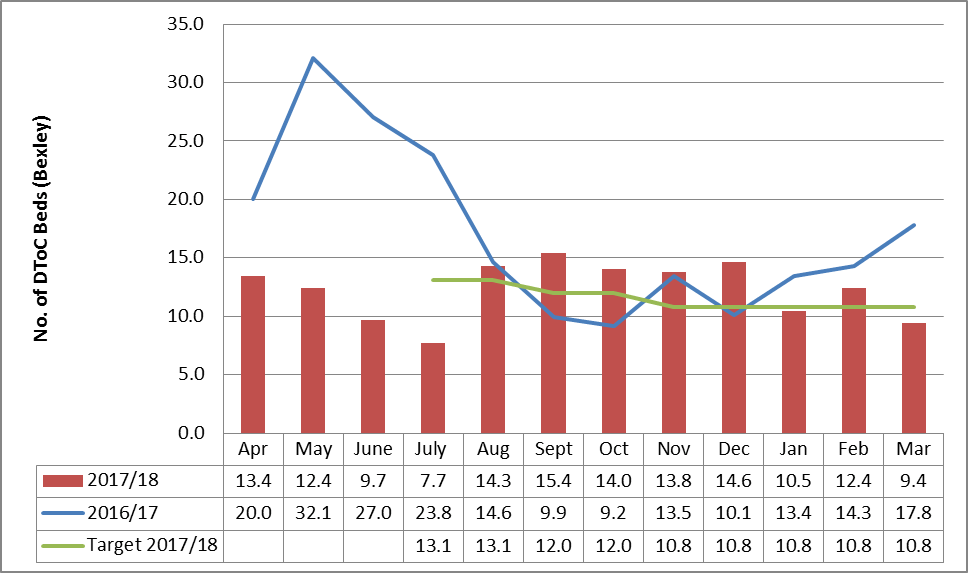 In April 2017, a new method of calculating DToC was introduced. Data on the number of patients delayed on the last Thursday of the month is no longer being collected. This measure has been replaced by a similar measure called DToC Beds. The DToC Beds figure is calculated by dividing the number of delayed days during the month by the number of calendar days in the month. It provides a similar figure to the patient snapshot but is more representative of the entire month rather than providing a view on one particular day. This means that DToC performance from 2017/18 onwards is not directly comparable with previous years.

The ASCOF handbook of definitions[1] states that “research has indicated that personal budgets impact positively on well-being, increasing choice and control, reducing cost implications and improving outcomes. Bexley has one of the worst rates of personal budgets and direct payments for both service users and carers.

Figures 103 and 104 show the proportion of people using adult social care who receive self-directed support and those receiving direct payments.

277 people with mental health needs represented a significant proportion (17%) of those in receipt of long-term community-based support. As these clients are in receipt of commissioned services, they are not currently counted as receiving self-directed support.

The remaining 6% (107 people) received other commissioned services such as learning disability employment support and prevention services. 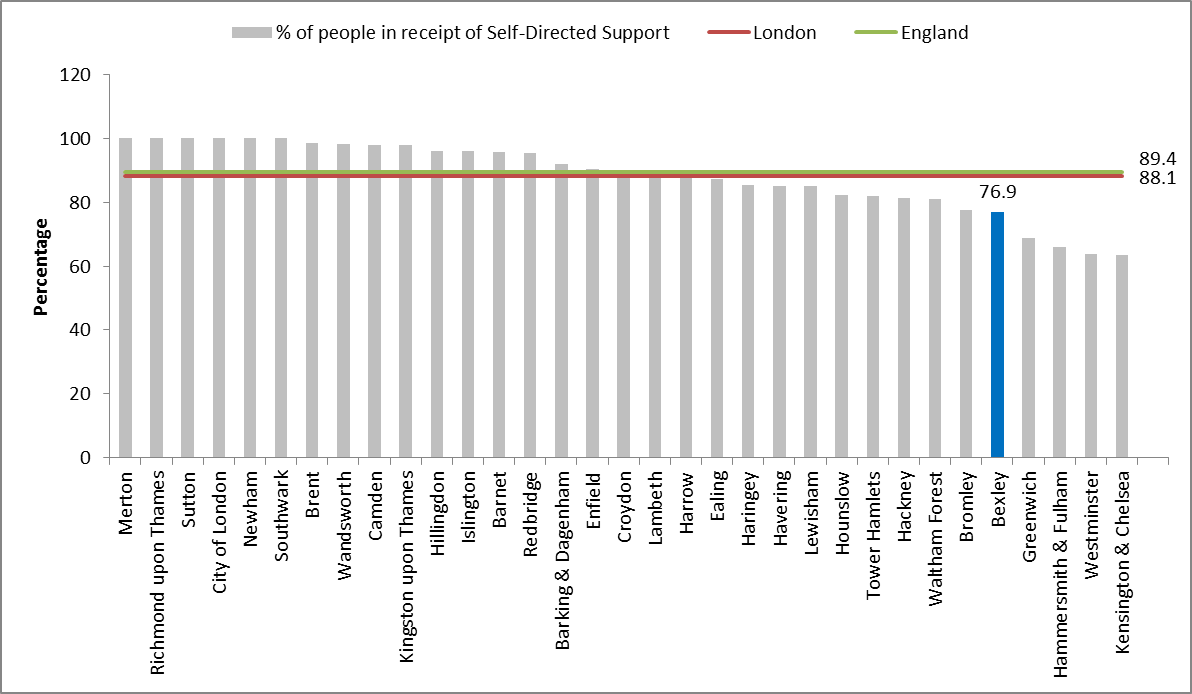 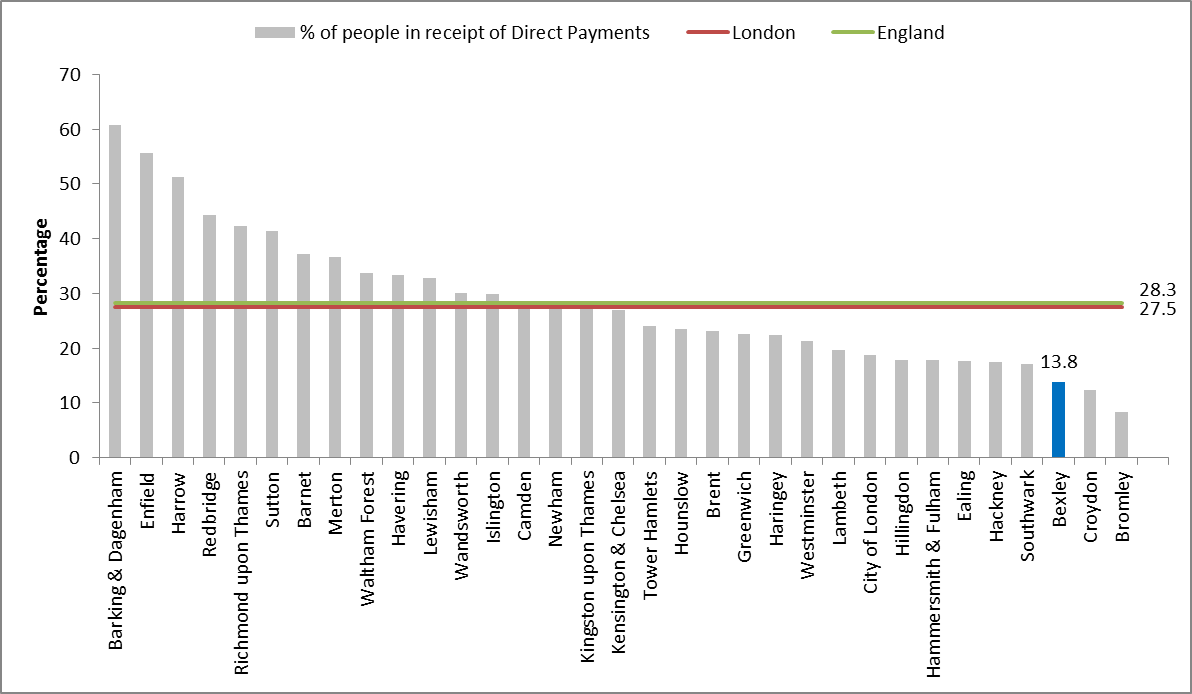 A more detailed analysis and understanding is recommended of the factors contributing to: