The number of carers in Bexley

Table 23: Provision of unpaid care by age in Bexley, Census 2011

[1] ‘Valuing Carers 2015 – the rising value of carers’ support’, Buckner.L, University of Leeds, and

The number of people claiming Carer’s Allowance is another useful measure that is helpful in identifying those who are giving a significant amount of care. Carer’s Allowance is payable to people aged 16 and over who provide unpaid care for at least 35 hours a week to someone who is in receipt of disability or social care benefits and who are a) not in full-time education or studying for more than 21 hours a week and b) earn less than £116 a week (after deductions). 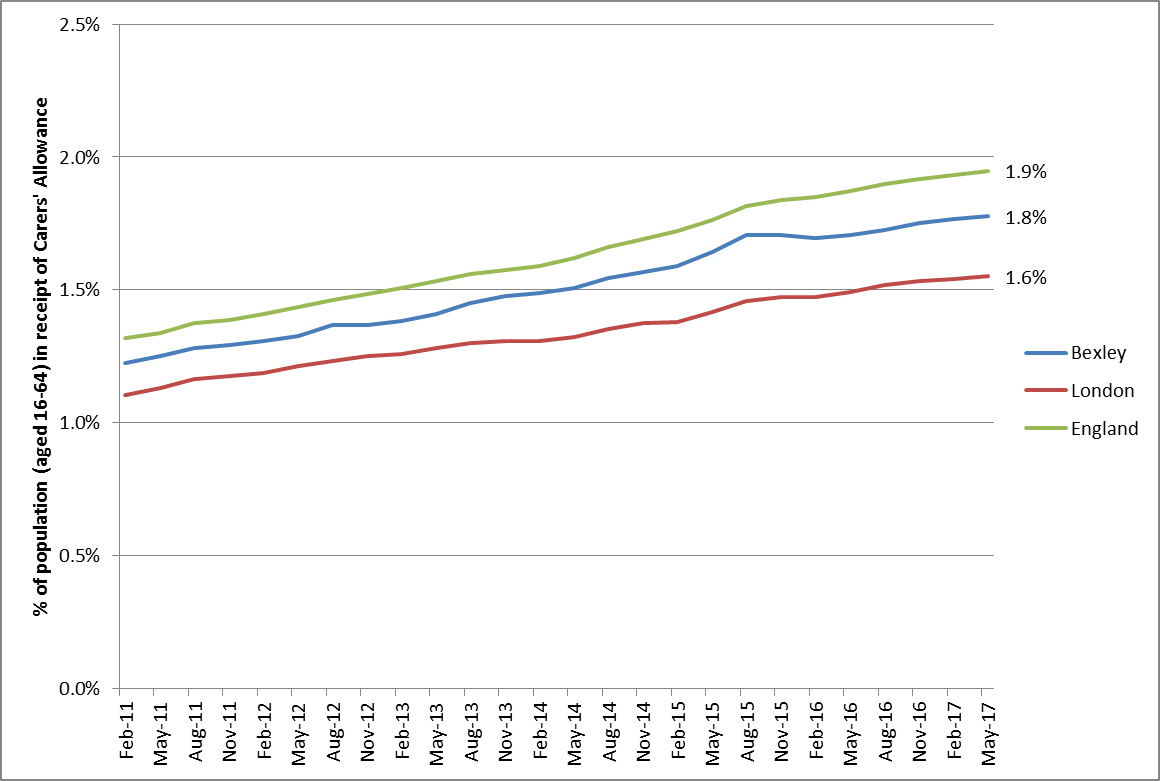 Carers make a vital contribution to promoting the wellbeing and independence of the people they care for and supporting carers effectively helps them to have a life of their own alongside caring. Carers also prevent those they care for from requiring more intensive social care support. Carers may themselves have social care needs that impact on their caring role.

Our Short and Long Term (SALT) statutory return gives a view of the tangible support being provided to carers. The Council provides direct support to approximately 3,000 carers a year. This includes self-directed support (SDS), Council-commissioned support, information and advice, and access to other universal services.

The number of carers receiving Council-commissioned support has fallen since 2014/15, which mainly reflects the growth in other forms of support. In particular, there has been an increase in the number of carers receiving direct payments and personal budgets since 2014/15, which is in line with the national policy commitment to give people choice and control over their own care and support. The main services purchased by carers through SDS are respite care and day care.

Information is a core universal service and a key factor in early intervention and reducing dependency. The number of carers receiving information, advice and guidance has increased significantly from 855 carers in 2014/15 to 2,176 in 2017/18.

Since October 2015, we have worked in partnership with the voluntary sector to provide a range of services to carers via the Bexley Carers Well-being Hub. Through this service, carers are helped to assess their need for support and then guided to services that are appropriate for their personal needs. Support includes carer’s breaks, befriending services, advice on welfare benefits and maximising income, plus a memory café. In addition, Bexley Care – our integrated care provider – employs a dedicated Carers’ Support Worker and offers the Carers’ Counselling Service.

Data from the Council’s SALT statutory returns shows that approximately 56% of carers were aged 18-64 in 2017/18, up from 54% in previous years. A further 44% were aged 65 and over. This highlights the risk that carers may develop their own health needs as they age, which may impact on their ability to carry on in their caring role. It is, therefore, important to engage with service users and carers to support early planning for living arrangements in later life, when older carers may no longer be able to provide support to the cared for person. This also underlines the importance of developing a range of housing and support options in the community to cater for different needs.

The low number of carers aged under 18 receiving support from adult services suggests that there is scope to further improve the identification, engagement and support of young carers in Bexley. Research also emphasises the benefits of a ‘whole-family’ approach and the effectiveness of multi-disciplinary working across services in improving outcomes for young carers and their families[1].

Results from the Survey of Adult Carers

Results from the Survey of Adult Carers in England for Bexley show that our Carer’s quality of life score was 7.5 in 2016/17 compared to 7.6 in 2014/15. The maximum possible quality of life score is 12. This is a composite measure which combines individual responses to six questions measuring different outcomes related to overall quality of life. These outcomes are mapped to six areas of life: occupation, control, personal care, safety, social participation, and encouragement and support. The measure is based on responses from 269 carers, giving a total of 1,614 responses over these six areas.

[1]Evaluation of the family and young carer pathfinders programme, Department for Education, September 2011

Figure 106: % of responses from carers in Bexley across six areas of life where needs were met or not met, 2016/17 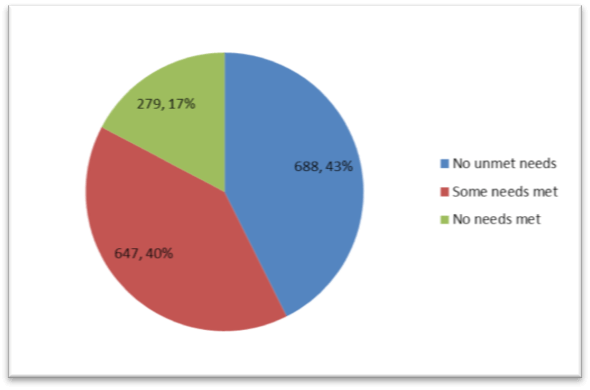 Since the last Carers’ Survey in 2014/15, the number of responses from carers where there were “no unmet needs” has increased across all six areas of life from an average of 40.3% to 43%. However, the results also point to some key areas of life where carers feel their needs are not being met. The top 3 areas of unmet need identified in the survey relate to encouragement and support in their caring role, control over their daily life, and social contact with people they like.

Table 27: Number of responses from carers in Bexley across six areas of life where needs were met or not met, 2016/17

In 2016/17, Bexley performed below the London and national average against a number of key measures in the Survey of Adult Carers:

Continue to encourage take up of personal budgets and direct payments for eligible carers and service users and further facilitate the local care market to offer more choice of high quality services.