In line with national trends, Bexley has an ageing population. It is estimated that the over 65-year-old population in Bexley increased from 37,506 in 2011 to 40,620 in 2017. This is predicted to reach 50,912 by 2030, which is equivalent to a further 25.3% increase in the older population. It is projected that this increase will be more rapid amongst those aged 85+. 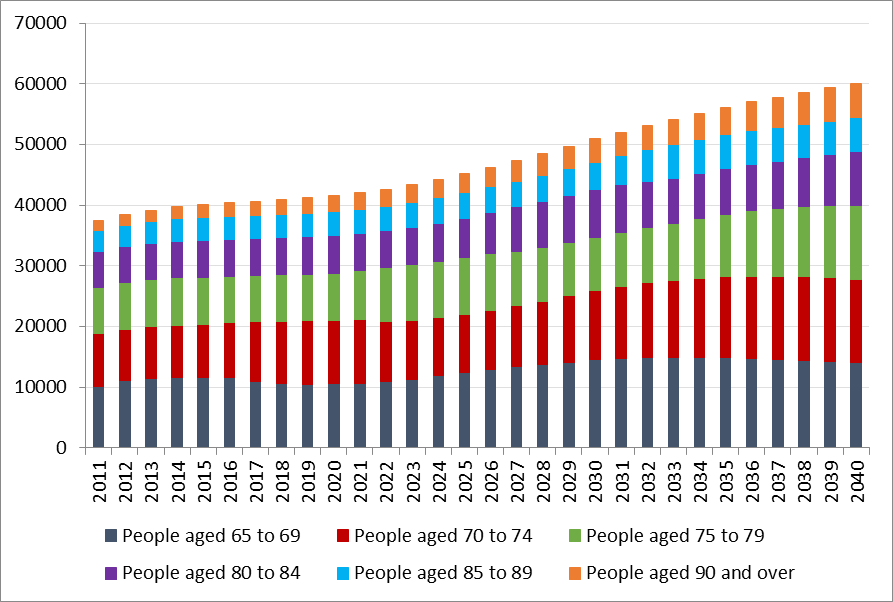 Figure 2 shows that London Borough of Bexley has the third largest proportion of the population aged 65 years or over in London. Older people make up 16% of Bexley’s population. 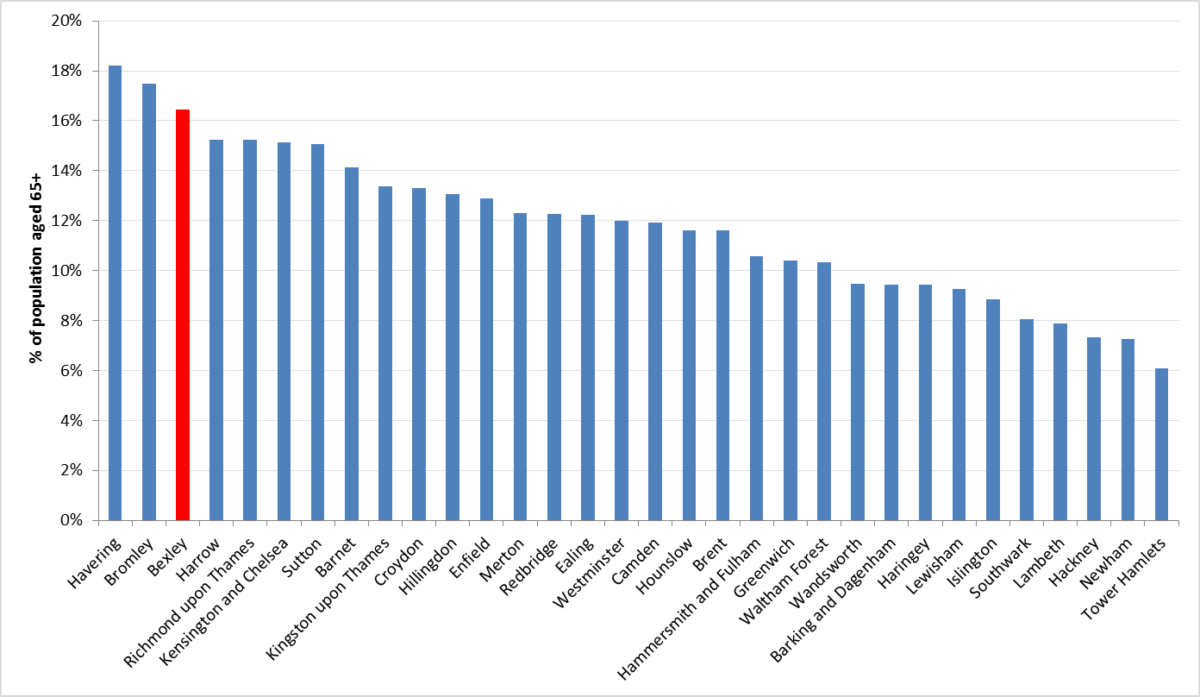 The elderly population is not evenly distributed across LB Bexley wards (Figure 3). The wards with highest numbers of older people are predominantly clustered in the southern half of the borough with Brampton, Sidcup, Longlands, St Mary’s and Blendon and Penhill wards having 20% or more of their population aged 65+. 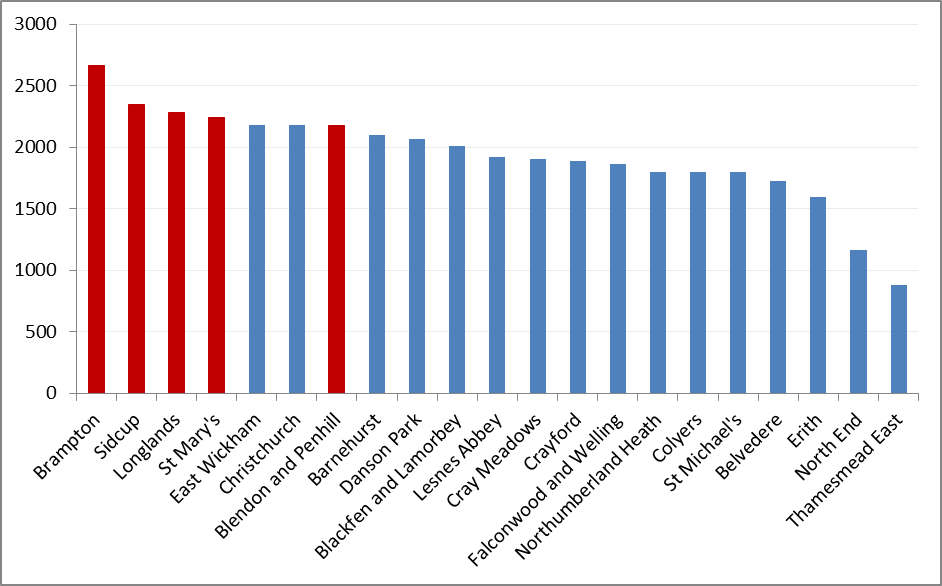 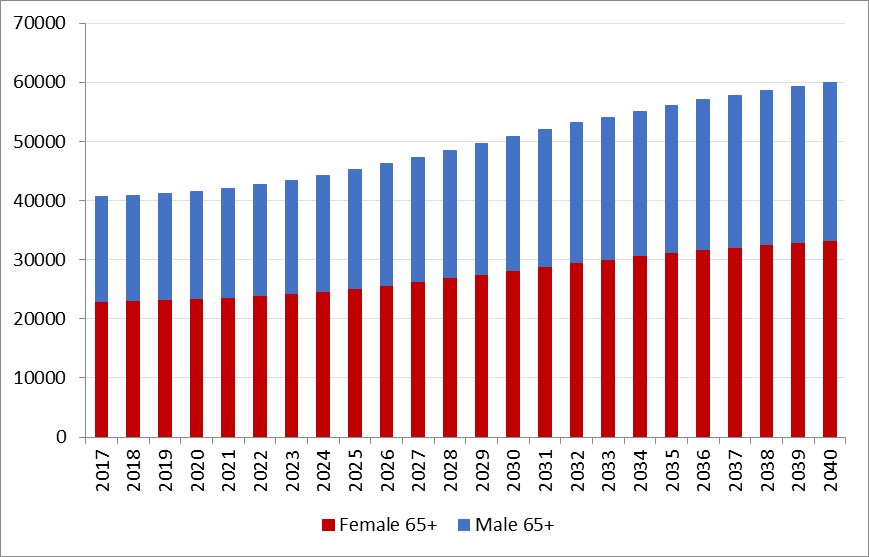 In the next decade, there is likely to be a significant rise in the number of older people within the local BME population as this group ages. In 2017, 8% of older people (aged 65+) were from BME groups. By 2030, this is predicted to increase to 14% of the older population. 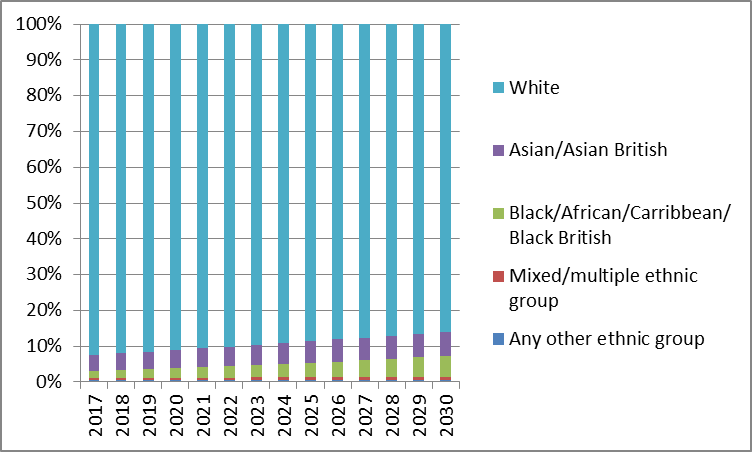 Ethnicity can have an impact on health with the prevalence of some diseases having a greater impact on some ethnic groups compared to others, and in trends in accessing care and other public services.

In 2014-16 life expectancy at age 65 in Bexley was18.6 years for males and 21.7 years for females. This is above the national average and below the regional average for both sexes.

In terms of time spent living without a disability, we have looked at the Office of National Statistics data for disability-free life expectancy (DFLE). DFLE is the amount of time that an individual, on average, can expect to live disability-free.

The latest available data (2014-16) for Bexley shows that male DFLE life expectancy at birth was 65.7 years and female DFLE was 63.8 years. Male DFLE at age of 65 was 10.5 years and female DFLE was 9.6 years. Interestingly for males this is higher than regional and national averages but for females is lower. Furthermore, DFLE at age 65 for men in Bexley is higher than for women, whilst regionally and nationally the reverse is the case[1].

The relationships between individual and area-level factors contributing to life expectancy are complex. Individual circumstances such as socio-economic status, genetic and biological factors, and health behaviors (for example, alcohol consumption and smoking) all have an impact on health and subsequent mortality. Area characteristics such as environmental conditions, the proportion of people living with deprivation, and the availability of local services and resources can also affect health outcomes. This leads to disparities in life expectancy between wards in Bexley. Life expectancy in the most deprived Bexley wards is lower than in the least deprived areas (6.4 years lower for men and 5.1 years lower for women), which highlights the existence of health inequalities in the Borough[1].