In the UK, it is estimated that 3.8m people aged over 65 are living alone. This has increased from 3.15m in 1996 – an overall increase of 21%. A further breakdown of the older age group shows that those aged 65 to 74 years living alone saw a statistically significant increase of 15%. The number living alone aged 75 and over also increased but by a larger percentage of 24%[1]. 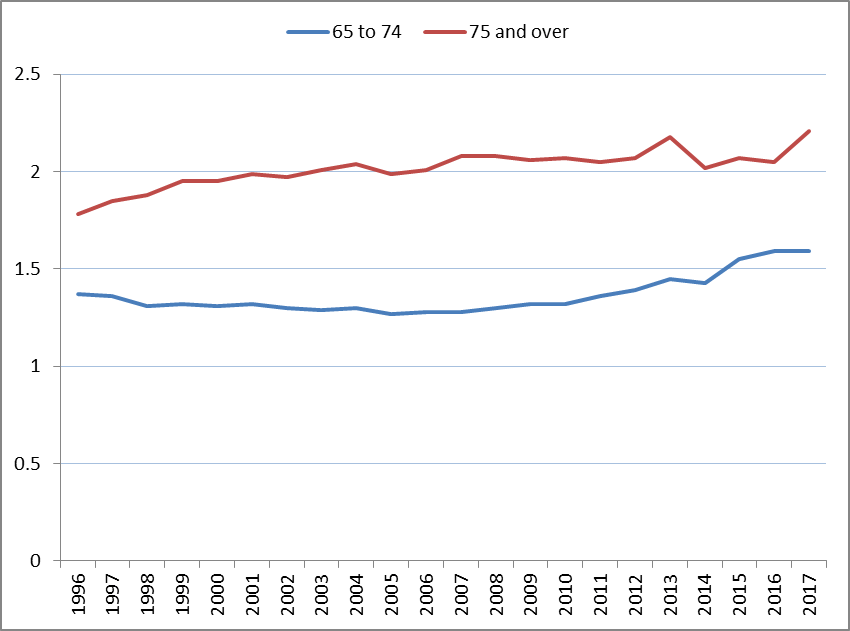 Earlier Census 2011 data based on Lower Super Output Areas shows that there are some significant concentrations of older people living in single person households. The highest concentrations are shown in the southern and north-eastern parts of the Borough.

Figure 67: 65+ population in Bexley living in one person households, Census 2011 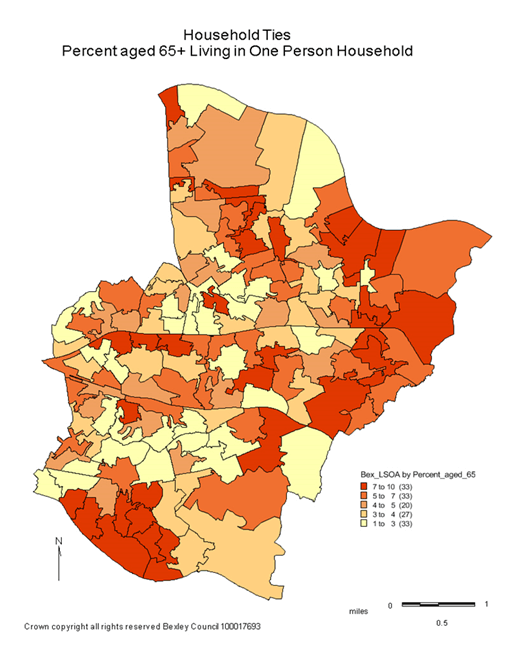 It is estimated that 15,323 Bexley residents aged 65+ live alone and this is predicted to increase to 19,439 by 2030 (+26.8%). The figures highlight the fact that there are more females than males predicted to live alone, reflecting higher life expectancy among females. In 2017, it was estimated that 69% of older people living alone were female.

Surveys have consistently shown that around 6-13 per cent of older people report that they are often or always lonely[1]. In April 2018, the Office for National Statistics published an analysis of the characteristics and circumstances associated with loneliness in England using the Community Life Survey, 2016 to 2017[2]. This highlighted that 5% of adults in England reported feeling lonely “often” or “always”, showing that loneliness can affect anyone, no matter how old they are. It also highlighted that there are certain people who are more at risk, including widowed older people who live alone, people with long term health conditions, and people who feel that they belong less strongly to their neighbourhood, such as young renters.

Each year in our Adult Social Care Annual Survey, the Council asks people who use our services whether they have as much social contact as they would like. The responses are collected across different cohorts of service users. Figure 68 shows the results from the survey for respondents aged 65+ and living in the community (excluding Learning Disability support and those in residential care). This shows that about 30% of respondents from this cohort feel that they do not have enough social contact or feel socially isolated.

[2] Office for National Statistics, Loneliness – What characteristics and circumstances are associated with feeling lonely?, 10 April 2018 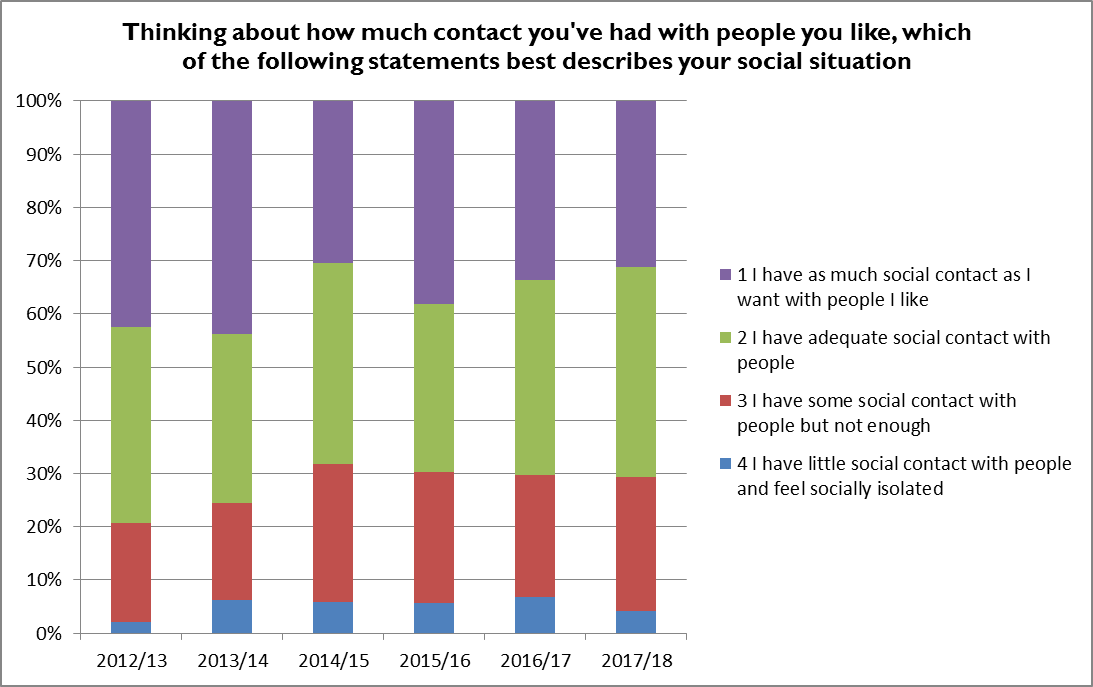 Just as poor health can act as a barrier to social participation, the lack of social connections is associated with increased health risks. Age UK’s evidence review[2] into loneliness found that loneliness can be harmful for our health, leading to poor lifestyle behaviours (e.g., drinking alcohol, smoking and poor diet) with lonely adults more likely to be overweight and less likely to exercise. Feeling lonely has been shown to increase blood pressure and the risk of cardiovascular diseases (see Figure 69), to elevate cortisol and stress levels weakening the immune system, and to impair sleep quality which causes memory problems. There is also a proven link between loneliness, depression and suicide. 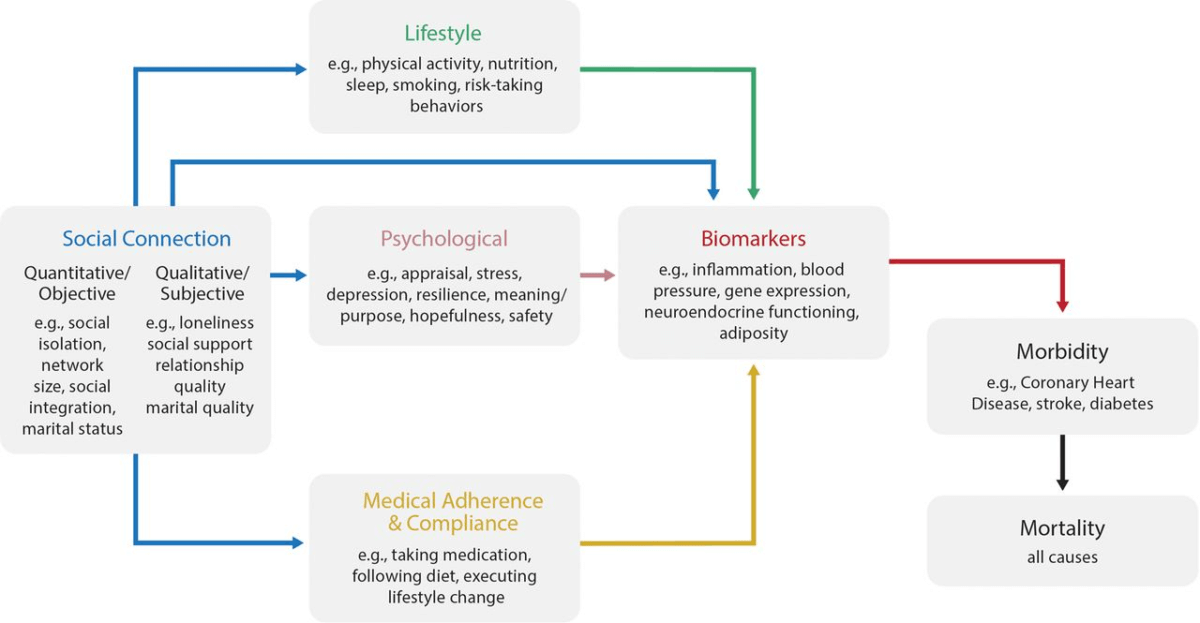 This highlights the importance of maintaining positive social connections as part of a healthy lifestyle.

What are we doing about it?

Bexley Health and Wellbeing Board Task and Finish Group: A cross organisational group was established in July 2015 to consider the wider health issues surrounding loneliness and how early intervention can mitigate some of the adverse outcomes and associated pressures on high cost services. Membership included a range of voluntary sector partners, council representatives, local churches and the NHS. The group met on four occasions during the course of 2015/16 to discuss a wide range of issues and progressed a number of actions, including considering the findings and guidance from the Campaign to End Loneliness[1], refreshing the Bexley volunteer offer[2], raising public awareness of loneliness and services that can help residents via the Bexley Magazine and ‘Bexley Care Hub’.

Bexley Ageing Well Strategy[3]: ‘Tackling Loneliness and building connected communities’ is one of the four themes in the strategy. The strategy gives an overview of the impact of loneliness and isolation and the types of activities residents can access to develop relationships and connect to their local communities. Examples include libraries, local archives, Men in Sheds project, social prescribing, the role of local health champions, volunteering, the Bexley Care Hub and specific support available for carers.

[1] Campaign to End Loneliness, Guidance for Local Authorities and Commissioners

Community Connect[1]: Community Connect, our social prescribing service, was rolled out across the Borough in October 2017, following a successful two-year pilot. This scheme is jointly commissioned between the Council and NHS Bexley CCG, managed by Bexley Voluntary Service Council and delivered by MIND in Bexley, with a Community Wellbeing Co-ordinator (CWC) working in each of our three Local Care Network areas. One of the critical success factors is the effective partnership working between the CCG, Council, GP practices, the VCS, and our evaluation partners – the University of Kent. Commissioned through the voluntary sector, Bexley’s social prescribing model offers a flexible and responsive service whereby GPs direct access to non-medical support for patients through the hundreds of different VCS organisations in the borough that can help patients achieve better health and wellbeing.

An evaluation of the two-year pilot was published in January 2017[2], which indicated that social prescribing had a positive impact on quality of life for the majority (90%) of clients and increased their mental well-being. It also showed a reduction in the burden on the healthcare system, including a reduction in ambulance calls, decrease in A&E attendances, fewer non-elective hospital admissions, and reduced average length of stay in hospital for clients in the period following their referral into the social prescribing scheme.

Prevention and Early Intervention (PEI) Co-production Model: A Task and Finish Group, comprising representatives from the Council, voluntary sector, and NHS Bexley CCG, have been exploring how to create a co-production model that can deliver prevention and early intervention outcomes. Workshops have been held with the Design Council using research and design tools to explore potential interventions to tackle social isolation and loneliness. Learning from the project is being used to inform the commissioning of broader PEI Initiatives and the first grant proposals from the VCS have been approved to deliver interventions around Mental Health Employment, Befriending and loneliness prevention for older people, and support for young people in transition with ADHD/Autism. A new financial modelling tool has also been developed, which was used to assess the bids with a strong emphasis on return on investment.

What works and best practice?

Age UK Evidence Review – Loneliness in Later Life[1]: This evidence review by Age UK includes a section on what works. Based on research available at the time, the review identified studies showing the effectiveness of interventions, which mainly sought to increase opportunities for social interaction:

The evidence review recognised that interventions are more effective when they are tailored to the needs of older people, which includes taking account of characteristics, such as sex, identity, language and culture. The importance of involving older people at every stage in the design, delivery and evaluation of interventions was also highlighted in the research.

A framework for loneliness interventions[3]: Campaign to End Loneliness and Age UK have developed a framework to tackle loneliness. The framework features four distinct categories of intervention that could be put in place to provide a comprehensive local system of services to prevent and alleviate loneliness: 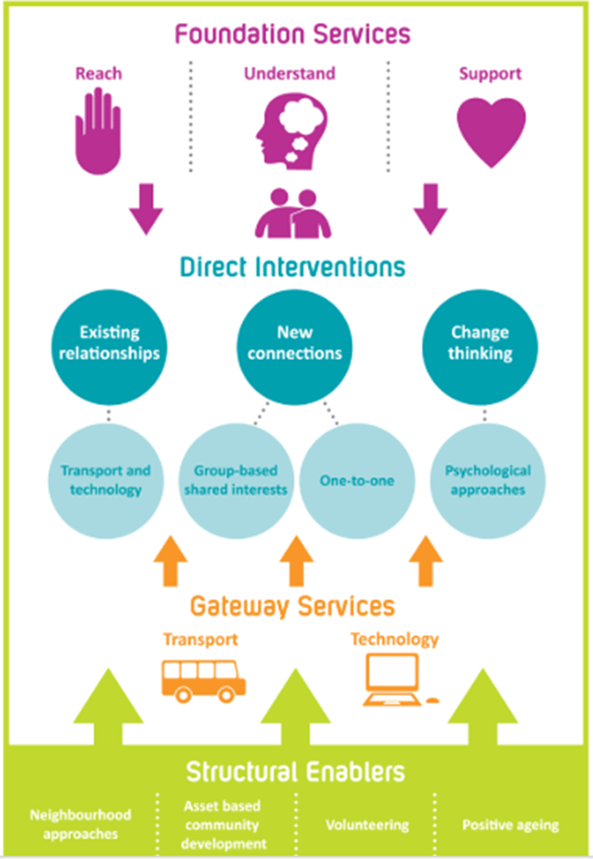 In developing these services, it is recommended that consideration should also be given to the Structural Enablers needed to create the right conditions for ending loneliness, such as volunteering, adapting local services to be accessible and inclusive of older people, and working with existing resources and capacity in the neighbourhoods where older people live to address loneliness.

What are the gaps?

National Strategy to Tackle Loneliness: In January 2018, the Prime Minister announced that a national strategy would be developed to alleviate loneliness in response to the report of the Jo Cox Commission on Loneliness published in December 2017[1]. A ministerial lead on loneliness has been appointed to oversee a cross-government group which is responsible for driving action on loneliness across all parts of government. The strategy will be cross-cutting, bringing together government, local government, public services, the voluntary and community sector and businesses to identify opportunities to tackle loneliness, and build more integrated and resilient communities.

[1] Jo Cox Commission on Loneliness, Combatting loneliness one conversation at a time – A call to action, December 2017

Tackling loneliness and social isolation at scale: Whilst awareness about loneliness among older people has increased, it is important to recognise that it can affect people of all ages, especially when transitioning from one stage of life to another. Connecting with others and building relationships with people who share similar interests takes time. Communities can provide a sense of identity and belonging whether it be a physical community, such as a neighbourhood, or a community of people with shared experiences, interests or culture.

The findings from the latest ONS study[1] into loneliness show that there are a range of factors and characteristics influencing loneliness, such as:

This highlights the need for a more strategic and co-ordinated response to tackling loneliness and isolation across all areas of public policy. Evidence suggests initiatives have traditionally focused on social interaction but community initiatives alone are unlikely to be sufficient to address these broader challenges, which can fuel loneliness.

The Campaign To End Loneliness recommend that all Health and Wellbeing Boards (HWBs) include loneliness in their Health and Wellbeing Strategy and Joint Strategic Needs Assessment, whilst recognising that HWBs may choose different ways to frame priorities and define actions, depending on their local situation[2].

The ONS has been tasked by the Government to develop national measures of loneliness with recommendations expected in late 2018.This highlights gaps around measuring impact of interventions and suggests that further consideration needs to be given to assessing the impact of services and the decisions of public bodies on loneliness and social isolation.

[1] Office for National Statistics, Loneliness – What characteristics and circumstances are associated with feeling lonely?, 10 April 2018