This section presents data on dementia prevalence and on key risk factors for this condition; information is presented for Bexley, IMD Comparators, London and England.

The latest predictions show that there are estimated to be 2,654 people aged 65+ living with dementia in Bexley; this is expected to rise to 4,659 in the next 20 years. 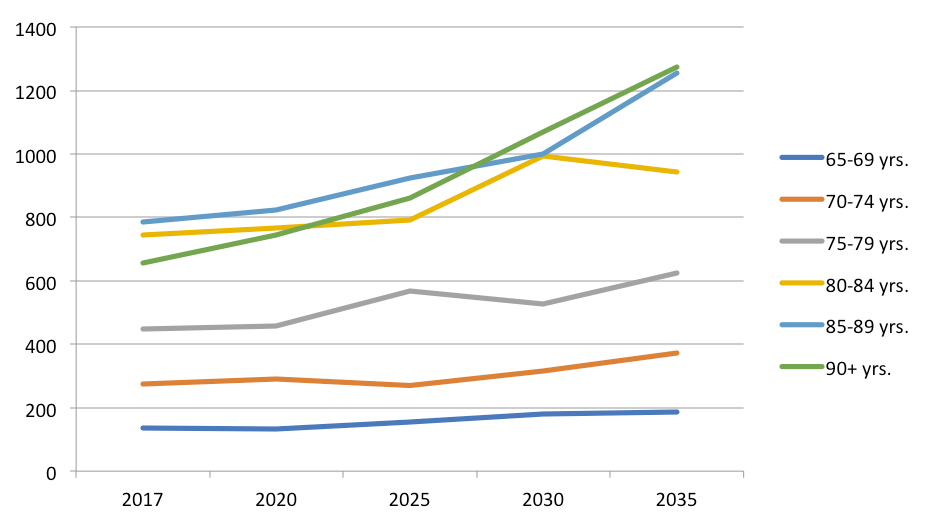 NHSE has set national diagnosis targets for dementia of 66.6%.

A total of 4.6% of patients’ aged 65+ registered with a Bexley GP have dementia; the proportion living with the disease is higher than the IMD Comparators, London and England averages. Bexley’s figure has remained relatively stable in the last 2 years. 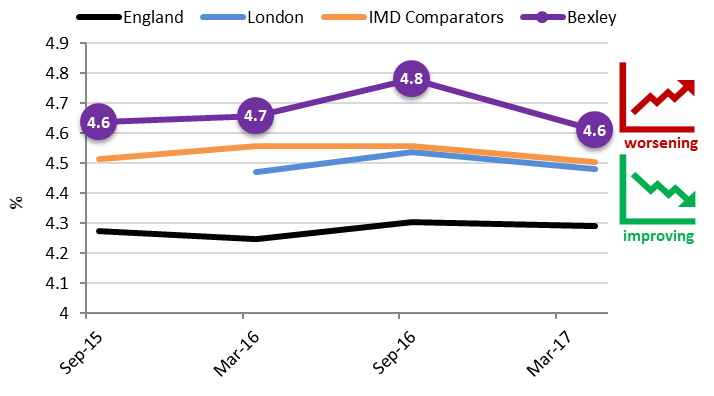 Figure 6 shows recorded numbers of patients (aged 65+) with Dementia by Bexley GP Practice. There are significant variations in recorded numbers. It is probable that this is a reflection of the spread of older people across practices – there are more older people in some practice populations than others. Figure 7 shows these numbers as a percentage of the total practice population.[1] 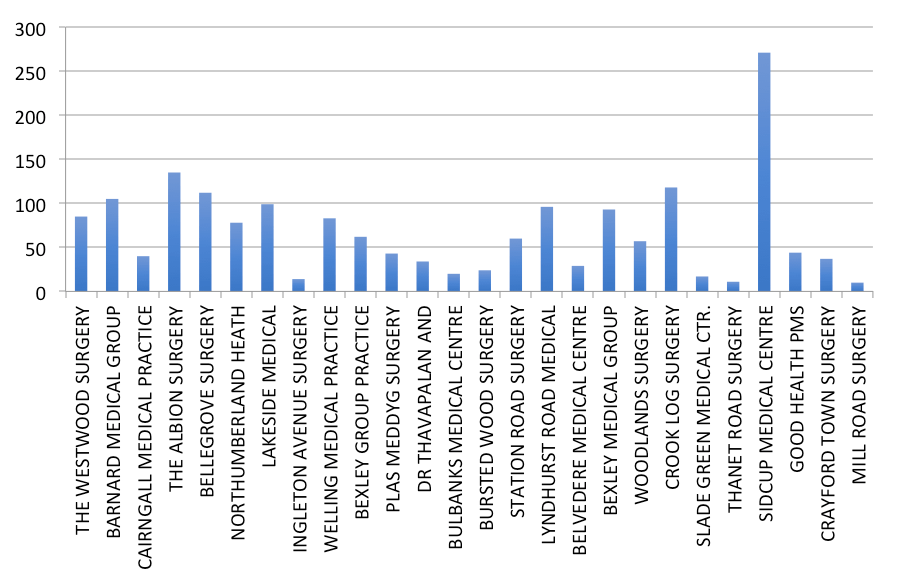 People are not generally admitted to hospital for Dementia. The Alzheimer’s Society report that falls, hip fractures, stroke, urinary tract and respiratory infection are the major causes of hospital admissions for people with Dementia. The National Audit for Dementia 2017 reported that 50% of the primary causes for admissions were either for falls, hip fractures or dislocation, respiratory related or urinary infections[1].

The number of people with dementia admitted to hospital in an emergency rose by 48% between 2008 and 2013. Around a fifth of these admissions related to potentially preventable acute conditions such as urinary tract infections, pneumonia and other respiratory infections[2]. Nationally, it is estimated that approximately 25% of beds in hospitals are occupied by people living with dementia. Their length of stay is often longer than for people without dementia and there can also be delays in supporting them to leave hospital.[3] A significant number of these admissions could be avoided through better support in the community and greater integration of health and social care services.

The needs of people with dementia and behaviors that challenge which requires more intensive one to one support is emerging as a higher profile issue and is impacting on patient flow though the acute system – more market development is needed to meet this demand going forward.

Figures 9 and 10 and Table 2 present rates of emergency inpatient hospital admissions of people (aged 65+) with a mention of dementia. Bexley’s rate is statistically similar to England and statistically lower than the London averages.

Figure 9: Directly standardised rate of emergency inpatient admissions with a mention of dementia per 100,000 population aged 65+, 2015/16. 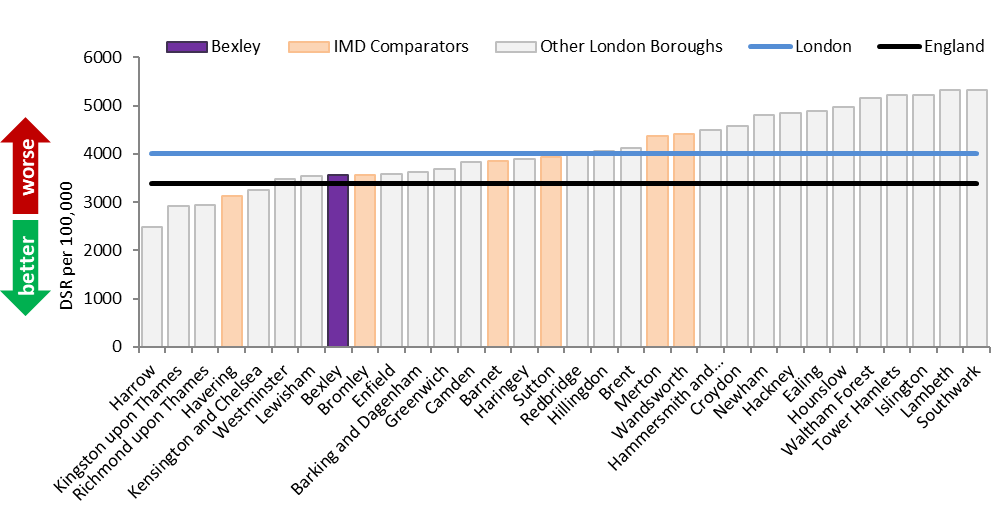 Nationally, the in-patient emergency hospital admissions with a mention of dementia has been rising steadily due to a combination of acute care clinicians becoming more effective at identifying dementia symptoms and recording dementia diagnoses. Bexley, London and our IMD comparator group mirrors this trend with the latest figure being 23% higher than the baseline 2012/13 rate.

Table 2: Directly standardised rate of emergency inpatient admissions with a mention of dementia per 100,000 population aged 65+, 2015/16. 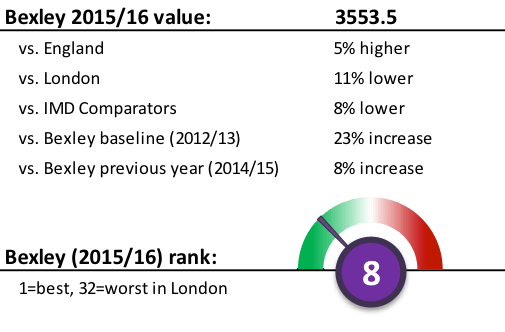 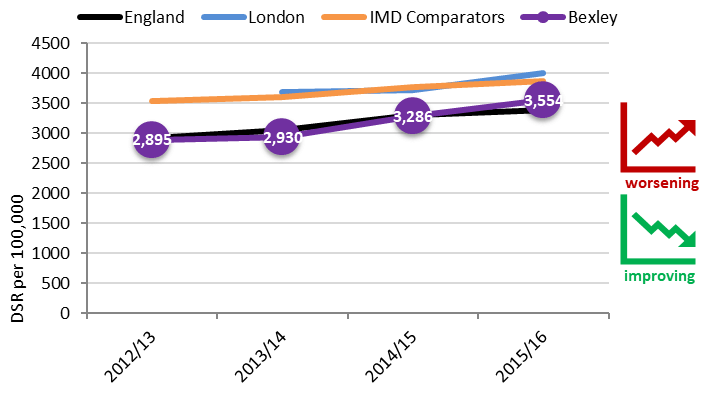 Admissions to hospital, particularly ones of short duration should be avoided if possible for this population, since people with dementia are particularly sensitive to changes in the surrounding environment which can increase the levels of anxiety and stress for an individual.

Table 3 highlights that 27.8% of these emergency inpatient admissions for people where dementia is mentioned are short stay (1 night or less). Whilst this figure is similar to the England average it has been significantly increasing since 2012/13, either due to lack of alternative provision or improvements in coding for dementia. It is probable that the increase is amongst the frail older population. Alternative models and pathways for the frail older population need to be explored to prevent short-stay admissions to hospital. 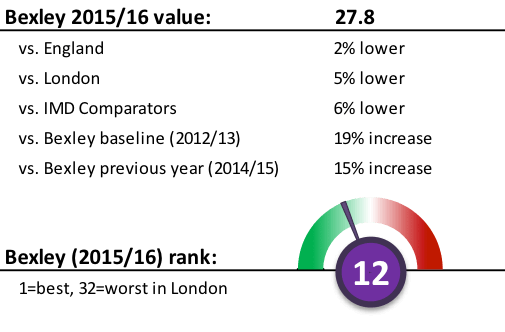 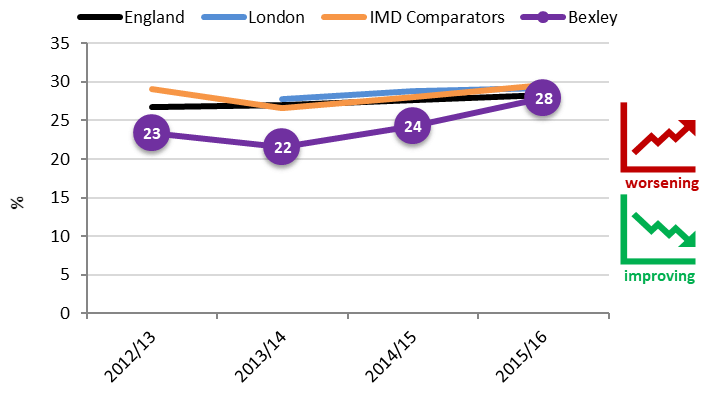 Figure 12: Percentage of emergency admissions for people (aged 65+) with dementia that are short stays, 2015/16. 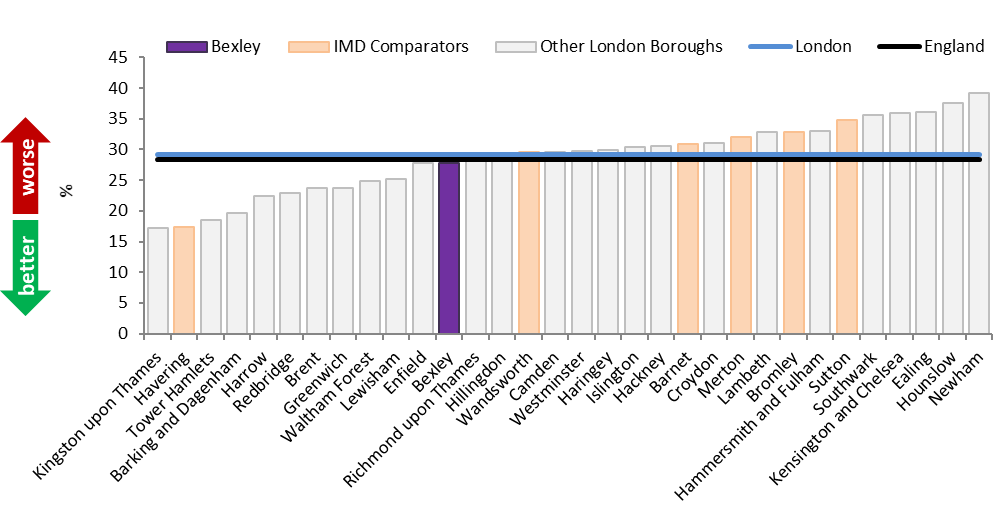 The proportion of people on dementia GP registers that receive inpatient care has been falling in Bexley and its comparator areas – mirroring the national and London pattern. The latest figure for Bexley shows that 53% of people diagnosed with dementia had been admitted to hospital in 2015/16 – this figure had reduced by quarter in the last four years. It is likely that this is a result of improvement in diagnosis rates and improved care received through GPs, the voluntary sector and Bexley Care.

Table 3 and Figures 13 and 14 show percentage of people with a recorded dementia diagnosis that were using inpatient hospital services at least once a year.

Table 3: Dementia – ratio of inpatient service use to recorded diagnoses, 2015/16 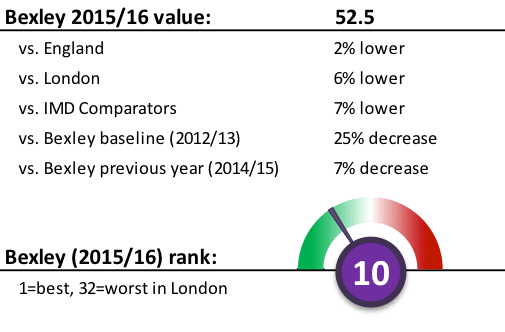 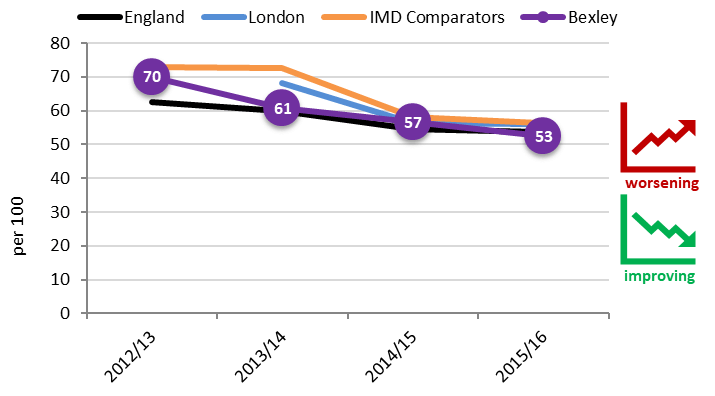 Figure 14: Dementia – ratio of inpatient service use to recorded diagnoses by London LA, 2015/16 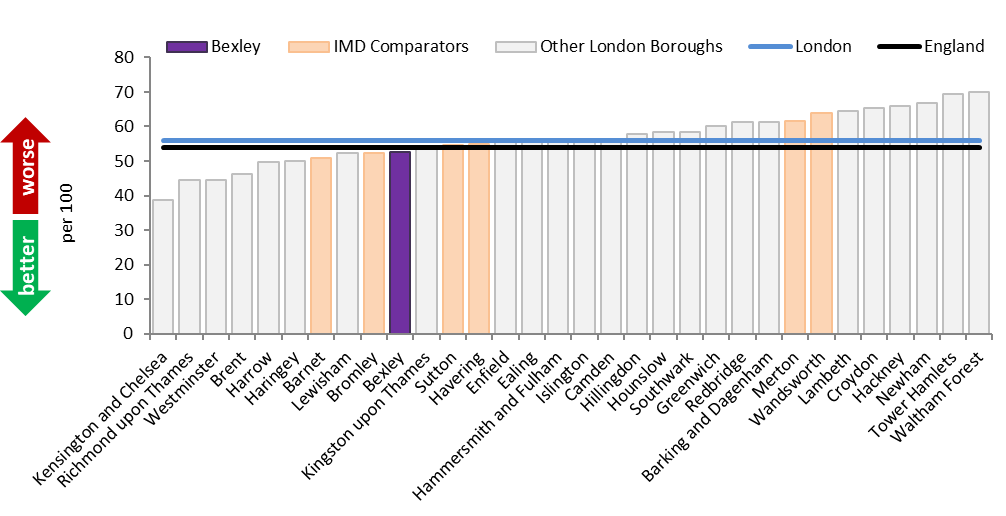