A healthy weight is a weight that does not increase the risk of health problems. For most people, body mass index (BMI) can be used to identify if they are at a healthy weight. The World Health Organisation (WHO) defines normal (healthy) weight by BMI values between 18.5 and 24.9[1]. BMI values below this range represent underweight, that could be caused my malnutrition or specific eating disorders. Individuals with BMI values above 24.9 are classified as overweight and obese, commonly referred together as excess weight.

In the developed world, the proportion of people with healthy weight is slowly diminishing, the number of underweight individuals remain relatively stable whilst the proportion of overweight and obese individuals is steadily rising. Levels of obesity have been rising across England over the last 20 years with rates increasing for both men and women aged over 16 years. In 1993, roughly 13% of the population were obese, by 2015 that figure had nearly doubled to over 25%.

Furthermore, all indications are that this trend is set to continue as the rates of childhood obesity also continue to rise. The National Child Measurement Programme (NCMP) is a national statistic where children have their height and weight measured in both Reception (4-5 year old) and in Year 6 (10-11 years old). Since its inception in 2006/7 the national prevalence of children falling into the overweight and obese category has remained stable in Reception at around 23% but has continued to rise in Year 6 from 31.6% in 2006/7 to 34.2% in 2016/17. If this increase is not halted, the incidence of obesity related chronic diseases is only set to rise in the future, along with the associated health and social care costs.

The increasing levels of excess weight are leading to an increased burden of avoidable ill health caused by chronic conditions including diabetes, hypertension, dyslipidaemia, cardiovascular diseases and certain cancers. As well as the physical risks to health of being overweight and obese there is also psychological effects, for instance there is a social stigma attached to obesity and those affected often face prejudice and discrimination and suffer low self-esteem.[2] Obesity puts people at higher risk of developing a number of long term chronic conditions that can have a huge impact not only on the individual but families and the health and social care system. See Figure 1. 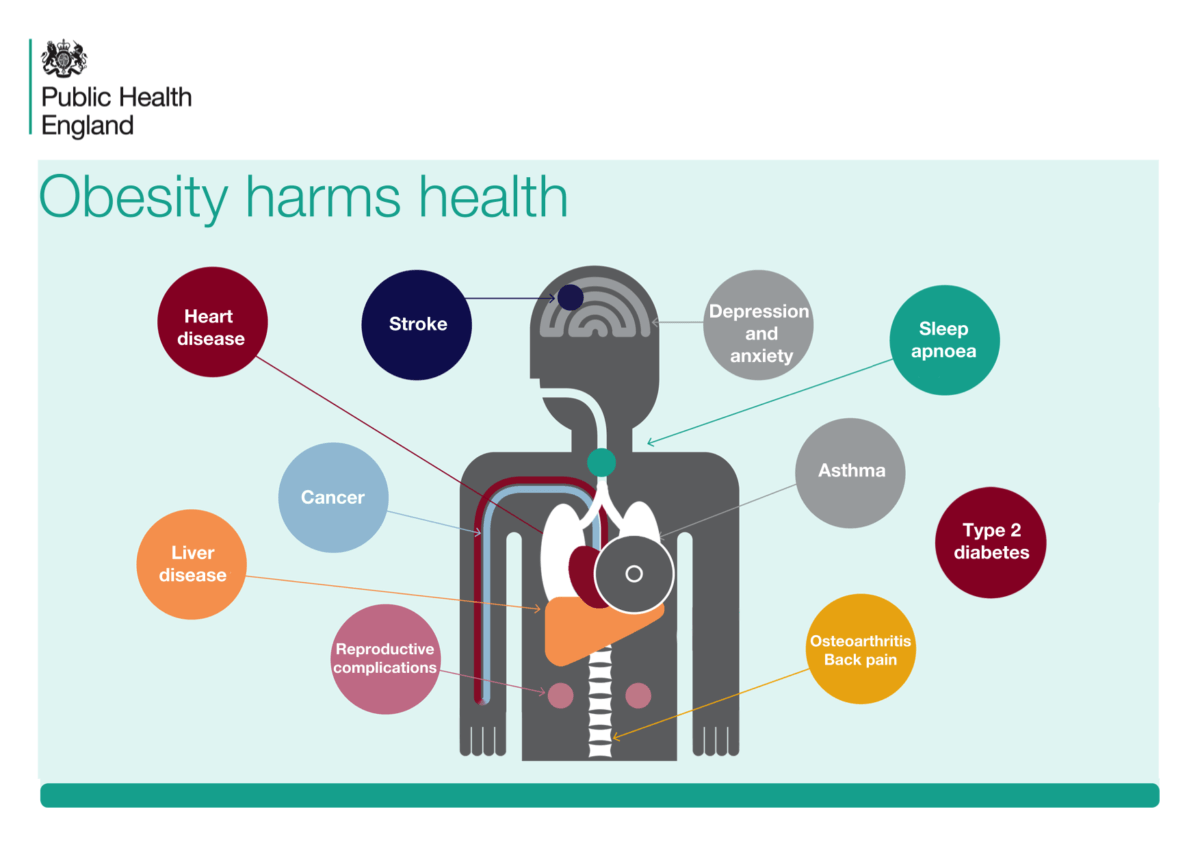 According to NICE[1] the cost of excess weight in the UK was estimated to be almost £16 billion in 2007 (over 1% of gross domestic product). The cost could increase to around £50 billion in 2050 if obesity rates continue to rise, in line with the prediction from the Department of Health[2].

First coined in the 1990s, the term “obesogenic environment” refers to the role that environmental factors (social, cultural and infrastructural) have on an individual’s ability to adopt a healthy lifestyle. For example, recent technological advances have led to labour saving devices and modes of entertainment (e.g. television and computer games) that have tended to reduce the need for physical exertion.

Similarly, environments that shape the availability and consumption of high calorie dense foods or influence levels of physical activity can have a detrimental impact on obesity. The complexity of the variables contributing to obesity is captured by the obesity systems map (sometimes referred to as “the spaghetti map”) within the landmark Foresight Report, which clearly illustrates the need for a long-term, sustained whole systems approach to tackling the problem.[3]

There is also a strong relationship between obesity and low socio-economic status, with greater deprivation often associated with higher levels of obesity within a population. People with low income often live in neighbourhoods with unsafe spaces for physical activity, less access to fruit and vegetables and a denser supply of fast-food outlets.[4]

Bexley is the 7th least deprived borough in London, based on Index of Multiple Deprivation (IMD) 2015 score. However, the borough also has the highest percentage of adults with excess weight[5] of all the London local authorities (64.6%) and the 2nd highest prevalence of excess weight in children attending Reception Year (26.7%).

Given the relatively low level of deprivation within the borough, the high prevalence of excess weight within Bexley for both adults and children, initially appears anomalous.

This chapter looks closer at the current picture of excess weight in Bexley’s residents, what can effectively prevent and treat overweight and obesity, and what is currently happening in Bexley that aims at increasing the proportion of individuals with healthy weight.