Each key priority for Bexley is outlined in the following sections in further detail. The ward level data referred to in the chapter reflect ward boundaries prior to boundary changes in May 2018.

In summary the key data points by exception are:

Maps have been obtained via the following public websites:

Violence Against the Person

A nationwide HMIC (Accuracy of Statistics) report found that violence against the person had the highest level of under-recording. There has been an increase in the reporting of domestic abuse and subsequent recording of these offences by the police, as a result of an improved response by police to domestic abuse following a HMIC inspection in 2013 on the handling of domestic abuse incidents.

The renewed focus on the quality of crime recording means that caution is needed when interpreting statistics on police recorded crime. While we know that it is likely that improvements in compliance with the National Crime Recording Standards have led to increases in the number of crimes recorded by the police (for example, violent crime and sexual offences), it is not possible to quantify the scale of this or assess how this effect and timing of improvements varied between different police forces. 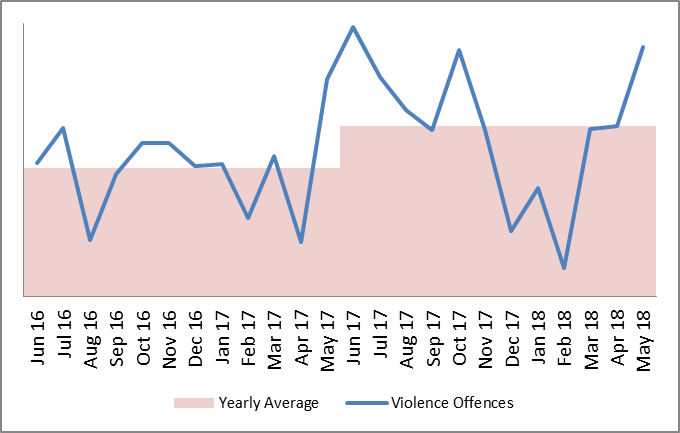 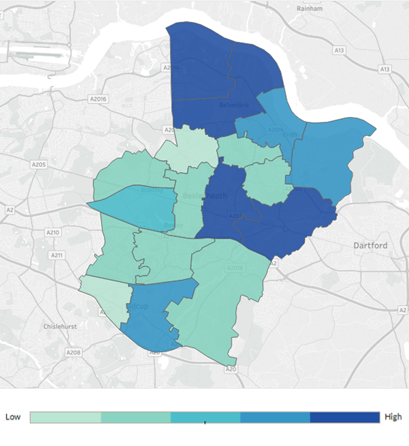 The Bexley Serious Violence Prevention Panel (SVPP) was set up in 2012 following a fatal gang related incident in the borough. The multi-agency panel works in a targeted way to monitor individuals who are at the highest risk of causing, or being the victim of, serious violence and to agree a multi-agency plan of action.

Since April 2017, 24 referrals were made to the Serious Violence Prevention Panel (SVPP). Out of those 24, 17 were accepted onto the panel, as they met the criteria. Advice and intervention through signposting is undertaken with those that don’t meet the panel criteria. The panel also uses an Early Notification system produced to assist professionals who have some concerns they wish to flag. This system helps to prevent escalation of issues and is used frequently by professionals to try and divert the individual away from potentially damaging behaviours.

The lead officer for Serious Violence also attends the weekly Missing meeting with Children’s Social Care and Police which is another place that makes it viable for young people to be identified at the earliest opportunity. Training is also provided for front line staff to keep them aware of the issues and there is close liaison with Royal Borough of Greenwich and the Police to share intelligence or interventions and, on occasions, enforcement.

An intervention programme is available to support high risk individuals which is funded externally and is reviewed on an annual basis.

The Serious Violence Prevention Officer has accepted referrals to work with children as young as 10 years old to prevent them being caught up in a dangerous lifestyle.

Since 2016, the potential escalation of gang activity is monitored by sharing multi-agency information that forms an on-going gang activity profile for the borough. This helps to highlight the number of complex issues around gang related activity where it is connected to criminal activity, territorial issues and conflicts with other gangs for example. There are concerns that the number of Bexley residents becoming involved in violence, gangs or missing to join county lines is increasing.

The Police “flag” and monitor offences they believe may be related to gang activity. For the rolling 12 month period to October 2017:

Whilst Bexley is not currently considered by the Metropolitan Police Service to be a “Gang Borough” (these receive additional funding from MOPAC to tackle issues), the proximity of the high level of incidents in Greenwich is of concern and the impact on families and communities is something that should not be overlooked.

To help to understand and tackle the rise in violence against the person offences in the borough, the BCSP is developing a Serious Violence Strategy. This strategy will encompass four main areas:

It will include a knife crime action plan not only tailored to the specific issues in the borough, but also paying attention to any emerging threats from other areas. The strategy will include an action to fully engage with communities who can help with raising awareness of all serious violence. They are also a vital link in to both the perpetrators and victims of serious violence, often having knowledge of the individuals concerned and their families.

The strategy will help build on the already excellent partnership working between both statutory and non-statutory organisations within the BCSP. All partners have had to think more creatively on how they work with others due to a general reduction in resources. This is an opportunity therefore to maximise these links and work more collaboratively on a very important topic such as serious violence.