It is unlawful to have a controlled drug in your possession unless you have authorisation in the form of a licence – for example, a prescription – or if you did not know the substance was a controlled drug.

It is an offence for a person to have a controlled drug in their possession, whether lawfully or not, with the intent to supply it to another who has no legal right to possess it.

Supply is the simple act of passing a controlled drug from one person to another. It does not matter if it was for profit or not.

The Metropolitan Police definition of drugs is: 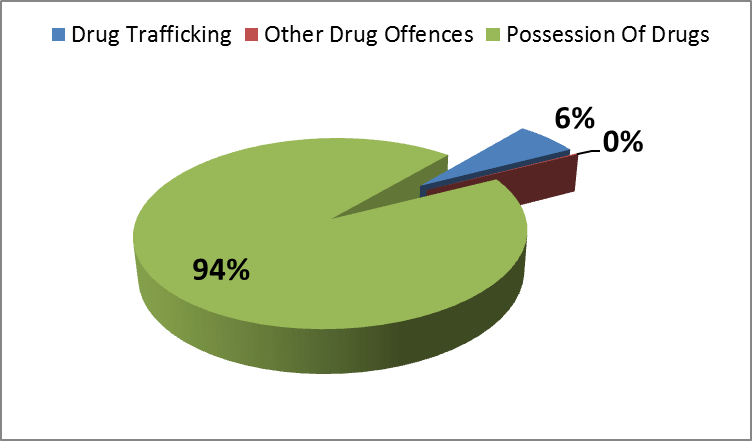 The map below highlights the most prominent wards for police activity in relation to drug offences. 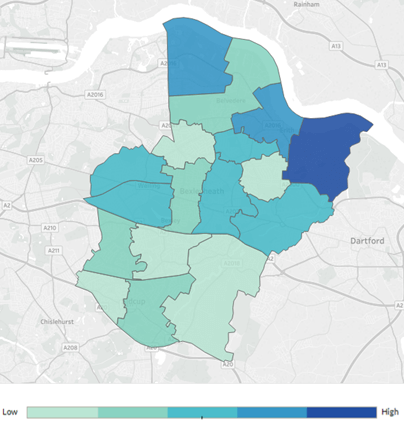 There is currently no specific way of identifying alcohol related crime. A specialised search of police data for allegations from 2016 and 2017 was undertaken to identify where alcohol had been involved in the following crime allegations.

The number of alcohol related allegations during 2017 decreased by 181 compared to 2016.

The highest volume reduction -89 was for Other Accepted Crime (includes forgery, perjury and other miscellaneous crime), followed by Violence Against the Person -64, the highest increases were for Robbery 25 and Burglary 16.

In the London Borough of Bexley the service is delivered via the Integrated Substance Misuse Service by providing a number of activities which include:

Bexley Drug and Alcohol Treatment System was re commissioned in 2016/17 and the new service; The Pier Road Project opened in July 2017 providing a range of interventions in the community and facilitating referrals to in-patient and residential settings.

The aim of the service is to deliver activities that result in people that are experiencing difficulties with their drug and alcohol use to receive treatment to enable them to achieve recovery in line with:

Drug and alcohol addiction is a key cause of societal harm, including crime, family breakdown and poverty. Public Health England report that 1.2 million people are affected by drug addiction in their families, mostly in poorer communities. Offences in which the consumption of alcohol is thought to have played a role of some kind in the committing of the offence, usually in the sense that the offender was under the influence of alcohol at the time. Examples of offences often committed by people under the influence are assault, breach of the peace, criminal damage and other public order offences.

Whilst drug dependence can affect anyone, we know that those in our society with a background of childhood abuse, neglect, trauma, poverty or mental health problems are disproportionately likely to be affected. In turn, the children of those dependent on drugs have to cope with the impact on their own development and there are often negative outcomes and in their lives.

Young people’s substance use is a distinct problem. The majority of young people do not use drugs and of those that do, most are not dependent. However, substance misuse can have a major impact on young people’s education, their health, their families and their long-term life chances. Cannabis and alcohol are the most common substances used by young people. A previous spike in the use of the ‘new psychoactive substances’ (NPS), which were also known as legal highs, has reduced, probably as a result of the restricted availability following legislation in 2016.

Broadly, in Bexley the treatment journey comprises of 3 distinct phases: 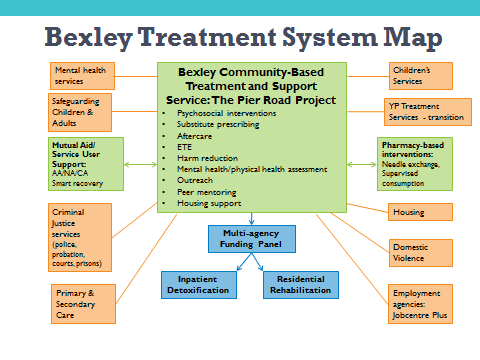 The Drug Intervention Programme commenced nationally in April 2003, it aims to provide a beginning-to-end support system that can direct drug using service users out of crime and into treatment.

Preventative measures have been undertaken and how awareness has been raised.

A key aspect of Bexley Integrated Substance Misuse service is to engage service users in to treatment early in their career to prevent offending and for service users currently in the criminal justice system to prevent further offending by delivering treatment interventions that promote recovery.

The Bexley treatment population gender demographic is in line with national profiles having 70% males and 30% females. The borough population profile identifies a more evenly distributed profile between males and females indicating that there is proportionately a higher number of the male population in treatment.

The mainly used drugs in Bexley is alcohol, opiates and crack and cocaine, this represents 72% of the Bexley treatment population.