Burglary is the theft, or attempted theft, from a premise where access is not authorised. Damage to a premises that appears to have been caused by a person attempting to enter to commit a burglary, is also counted as burglary. Residential and commercial burglaries are distinguished by the function of the building.

Residential Burglary Reporting in Bexley (12 month rolling to May 2018) 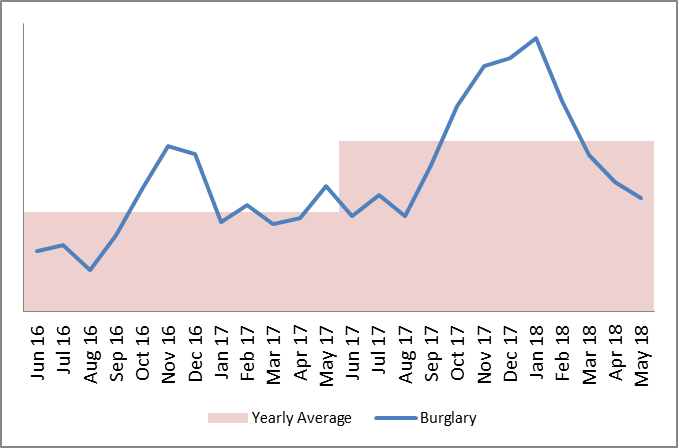 The map below highlights that the most prominent wards for residential burglary within Bexley. 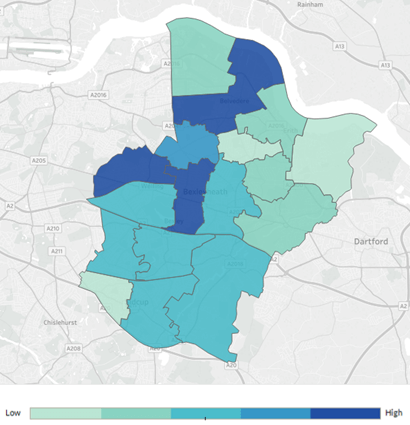 Bexley Police have been proactively raising awareness of Burglary to both victims of burglary and to adjacent properties, by giving advice on ways to deter burglars in order to protect their properties. The Partnership has a number of projects and initiatives to tackle Burglary and has worked in partnership with Neighbourhood Watch, St Giles Trust and the Bobby Van home security service. Actions to prevent Burglary have continued to be developed and delivered on an on-going basis through the multi-agency partnership approach.

In 2016/2017 there were 503 referrals to the Victim Support home security project (Bobby Van). Support offered includes a whole host of measures, such as carrying out security surveys and upgrades to support people who’ve experienced burglary,

Neighbourhood Watch operate and continue to recruit in every Ward (21 going down to 17 from May 2018) in the Borough targeting roads that have experienced burglaries, which don’t have Neighbourhood Watch cover. Overall 41,834 homes are covered, with 1,116 residential coordinators and non-residential watches such as Shop Watch and Hound Watch.

Burglary has been identified as a top priority by people who live and work in Bexley from the Bexley Crime Survey. Burglary is a highly intrusive crime and the impact of this goes beyond the victim, impacting upon families and increasing the fear of crime in a neighbourhood.

The BCSP has been sharing key information amongst partners and local residents, and by promoting crime prevention interventions via the distribution of materials to residents and businesses.